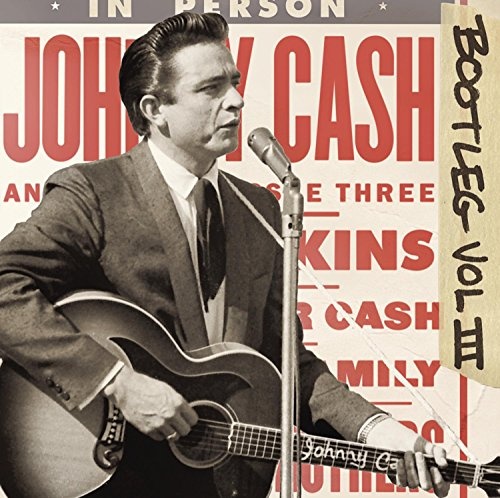 You've got to be a Johnny Cash fan to truly appreciate what's happening on the third volume in Legacy's Bootleg series Live Around the World. This double-disc collection contains 53 tracks culled from 23 years, 1956 to 1979. The heart of its performances are from the Newport Folk Festival in 1964; a show for the troops in Long Binh, Vietnam in 1969; for Richard Nixon at the White House in 1970, and at the Osteraker Prison in Sweden in 1972. The sound varies in quality but the selection is stellar. The disc starts with songs from his earliest days at the Big "D" Jamboree in Dallas (with the Perkins Brothers), with Cash playing early versions of "I Walk the Line" and "Get Rhythm." The nervousness in the former tune is notable: Cash hums between verses to make sure he's on pitch. Three years later, he was imbuing his song choices with authority, even as he presented himself with humility to his audience. His version of "Cotton Fields" sounds like the taste of bitter memory more than of longing nostalgia. From the Newport gig (introduced by Pete Seeger), Cash is without drums but has plenty of electric guitar. The version of "Folsom Prison Blues" is one of the best on record. Cash introduces "Don't Think Twice It's Alright" with a hearty endorsement of Bob Dylan. The Vietnam show is all audience requests, performed when Cash had pneumonia. There are killer renditions of "Cocaine Blues," and "Jackson" in duet with with June Carter Cash. Disc two begins with a long, patronizing introduction by Nixon. Cash rises to the occasion without condescending to the audience by playing his then-current hit ("A Boy Named Sue"), his own "Five Feet High and Risin'," and Leon Payne's "Lumberjack" before launching into a set of country-gospel tunes backed by his band, the Carter Family, and the Statler Brothers. The prison gig in Sweden has him delivering a knock-out, uptempo take of Kris Kristofferson's "Sunday Morning Comin' Down" and a devastating read of the traditional "The Prisoner's Song," with a moving spoken intro. Playing Steve Goodman's "City of New Orleans" for a Columbia Records' convention, and the closing, honky tonk, piano-driven read of Billy Joe Shaver's "I'm Just an Old Chunk of Coal," from the Nashville Inn in 1979, underscore who and what Cash is: a free and egalitarian citizen and keeper of American song's flame. From folk to country, from past to present, his complex persona exemplifies his rare ability to stand and deliver to every audience, not only in the way they wanted him to but also, perhaps, in the way the needed him to. Bootleg, Vol. 3 showcases what we already know (intellectually, at least) about Cash in a very emotional and visceral way.