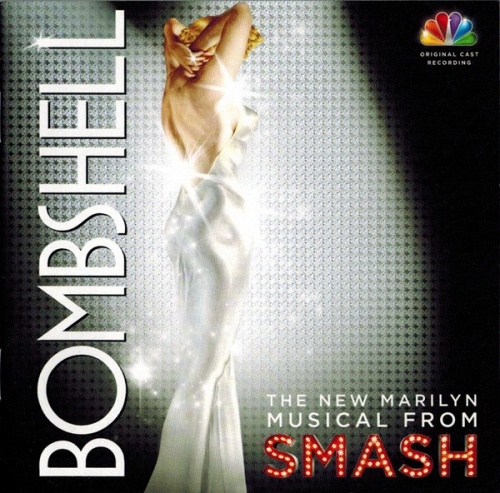 NBC's musical-within-a musical TV series Smash kicked off its second season by releasing the original cast recording of Bombshell, the Marilyn Monroe-inspired production the show's characters struggled to get off the ground in the first season. That was a smart move, since the Bombshell songs that were included on the season one soundtrack were among the most vibrant, capturing the passion that fuels staging a Broadway show. Bombshell plays like a true original cast recording, tracing the show's plot in its liner notes and separating its songs into acts. While the competition between Karen (Katharine McPhee) and Ivy (Megan Hilty) over who would be Bombshell's leading lady was one of the main plot points of season one, the cast recording features both wannabe Marilyns, allowing each performer to play to her strengths, whether they're singing together, as on "Let Me Be Your Star," or separately. While both actresses sing ballads and rousing songs, McPhee's more delicate voice works especially well on vulnerable numbers like "Never Give All the Heart," and Hilty's playful Monroe impersonation sizzles on "The National Pastime" and "I Never Met a Wolf Who Didn't Love to Howl." As with the tracks that premiered on the season one soundtrack, Bombshell was written by Scott Wittman and Marc Shaiman, who bring the same wit to the rest of these songs. The slick, brassy "Smash!," "Public Relations," and "Dig Deep" examine the star system and publicity machine that Marilyn used (and was sometimes abused by) with clever lyrics, while "Don't Forget Me" is exactly the kind of showy finale expected from this kind of old-school musical. Elsewhere, Bombshell spotlights Smash's on-the-mark casting: Bernadette Peters gives the project more Broadway credibility with her turns as Marilyn's mother on the bubbly '30s pastiche "At Your Feet" and the unabashedly sentimental "Hang the Moon." Tony Award-winner Christian Borle delivers a show-stopping performance as a motor-mouthed Daryl Zanuck on "Don't Say Yes Until I Finish Talking," and Leslie Odom, Jr. embodies Nat King Cole on "Let's Start Tomorrow Tonight." Even if Bombshell isn't a real Broadway musical, it hits all the notes a production like this should, and showcases the most appealing parts of Smash in the process.