Not since the days of Ignace Jan Paderewski had a pianist been more closely associated with the music of Frédéric Chopin than Arthur Rubinstein, for many of his admirers the composer's greatest interpreter in the 20th century. As passionately patriotic as his two great Polish predecessors, Rubinstein nonetheless became regarded in the public imagination as an aloof, aristocratic figure whose playing was cool, precise, and elegant. Yet this image is belied by Rubinstein's actual playing, which was quite vigorous, urgent, and even explosive, well into his eighties. This twofer from RCA Red Seal presents some of Rubinstein's best-loved recordings from 1946 to 1972, featuring the two piano concertos on the first disc, and offering a sampling of the most popular solo piano works on the second CD, such as the Polonaise in A flat major, "Héroique," the Fantaisie-Impromptu in C sharp minor, the Nocturne in E flat major, and the Waltz in D flat major, "Minute," among others. The wide range of Rubinstein's expression can be judged best from these short works, because the selection covers music of quiet intimacy, heroic bravado, and everything in between. The sound of these recordings is a little variable, as might be expected from their vintage, and the reproduction is poorest in the recording of the Prelude in D flat major, which is the oldest. Even so, Rubinstein's legacy is so important and his interpretations are so influential, the occasional sound problems are insignificant. This album is recommended for any who would like to gain a better appreciation for Chopin, Rubinstein, and piano music in general. 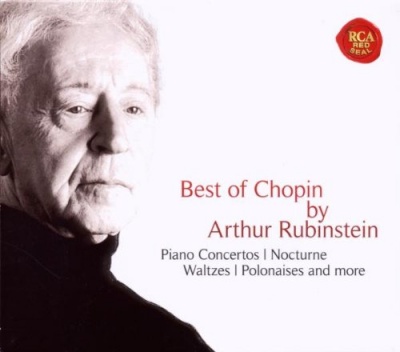