Accompanied by the Philharmonia Orchestra conducted by David Zinman, violinist Joshua Bell introduces William David Brohn's arrangement of "West Side Story Suite," a 19-minute work drawn from Leonard Bernstein's music for the Broadway musical West Side Story, in a world-premiere recording. The arrangement comes ten years after Bernstein's death, but his daughter, Jamie Bernstein Thomas, in her liner notes, suggests that the composer would have approved, although she cautions that his reactions could be unpredictable. Whatever he might have thought, the suite is really a minor, unremarkable effort that does little more than string together the major melodies from the show's songs for Bell to render in his characteristically high-pitched playing. Far more interesting, even if it is included only to fill out the disc, is the five-part, half-hour-long "Serenade After Plato's 'Symposium,'" a piece of Bernstein program music that makes greater demands on the orchestra and soloist. "West Side Story Suite" may get the headline here, but the serenade is much more worthy of the musicians' time and effort. The songs (also included are numbers from On the Town and Candide) are better left to the shows for which they were written. 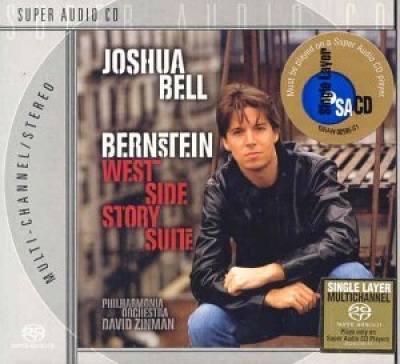