It is rather surprising to see Esa-Pekka Salonen and the Los Angeles Philharmonic's Sony Classical recording Herrmann: The Film Scores in a revitalized Great Performances package. This campaign was begun in the 1980s as a way to reactivate older CBS Masterworks titles at a lower price, the series being typified by a newspaper-style cover, heavily reduced liner notes, and a gratuitous listing of other titles within the series. We thought we'd seen the last of Great Performances a long time ago, but admittedly the market penetration of this imprint was so successful it would be foolhardy for Sony to abandon it altogether.

Herrmann: The Film Scores was an instant classic once it first hit the stores back in 1997. It was the direct result of Salonen's own concern to connect with the musical heritage of his audiences once he was appointed to the post in Los Angeles. Many of the musicians in the Los Angeles Philharmonic had worked, or were actively working within the film community associated with "Hollywood" -- doubtless some were old enough to have worked under Herrmann himself. Bernard Herrmann was arguably the most "serious" among serious musicians to write scores for "A" class motion pictures, and Salonen treats Herrmann's suites to Psycho, Marnie, Vertigo, Fahrenheit 451, and Taxi Driver as though they are "real" music. The sense of independence from the original soundtracks in Herrmann's music is nowhere felt with more ardor than here, not even in Herrmann's own commercial recordings of them, which tend to re-create the visual experience despite that, in recording the music after the fact, he was no longer tied to the tempo of the picture. Salonen has, in concert, conducted this music along with clips of the original films, but on the recording sticks to the suites that Herrmann compiled from them, avoiding repetitive cues and projecting a real beginning and ending to the film score segments selected. These are stirring, intense readings with an urgent sense of energy, and the listener will feel the chilliness of Herrmann's "black and white" string scoring from Psycho.

The recording quality is truly fabulous, and there is an SACD version of this album that likely represents Herrmann: The Film Scores to its best advantage in terms of audio. Nonetheless, for those on a budget and with a taste for top-notch orchestral film music performed by a world-class orchestra and conductor, the Great Performances issue of Herrmann: The Film Scores isn't just a bargain, it's a steal. 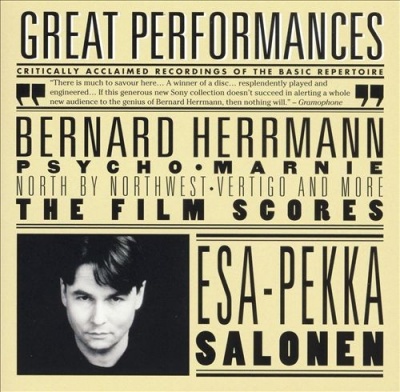