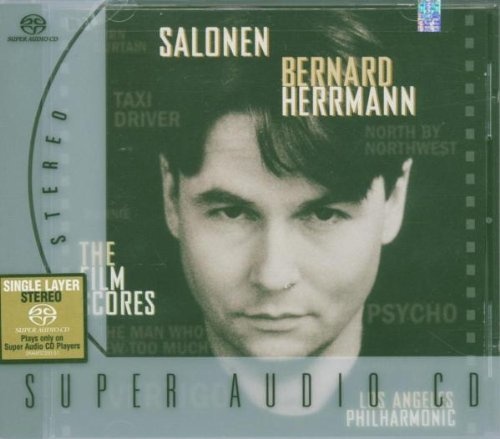 New recordings of the film music of Bernard Herrmann (1911-1975) have been sprouting like dandelions in recent years, as exposure on home video and various cable channels has raised the profile of film scores among casual viewers to its highest level ever and stimulated new interest in the whole field. And what more logical orchestra to record Herrmann's music than the Los Angeles Philharmonic (under conductor Esa-Pekka Salonen), which represents the high-culture side of music immediately adjacent to Hollywood? This album opens with what is probably the most straightforward and disposable piece of music that Herrmann ever wrote for Alfred Hitchcock, the prelude from The Man Who Knew Too Much, which makes a kind of bite-sized appetizer for what follows: "Psycho - A Suite for Strings," 11 short movements played about as tautly as they have ever been presented, right down to the screechy murder-sequence music; the gloriously romantic prelude and hunt music from Marnie; the loony overture for North by Northwest; a three-movement suite from Vertigo's lush score; and just under seven minutes of Herrmann's unused music from Torn Curtain. The CD also contains a 20-minute suite derived from the score of Fahrenheit 451, and seven minutes of the last score that Herrmann ever wrote, from Taxi Driver. The results are impressive -- though it should be pointed out that Herrmann himself made good recordings of virtually all the music on this album for Decca/London during the 1960s, several with more prestigious orchestras -- with finely wrought playing throughout. The orchestra's cohesiveness comes into play in the quiet passages of the "Psycho" suite, where Salonen gets the bass and cello sections playing like single instruments. The sequencing is also very sensible, shifting the moods carefully for the listener so that a sense of variation is maintained. This album also has the distinction of being the first collection of Herrmann's music to appear on Super Audio CD -- a format that was made for music of this scope and range, bringing the bowing of the strings and the surge of the percussion, as well as the horn calls on "The Hunt" from Marnie, right into the listener's own room.