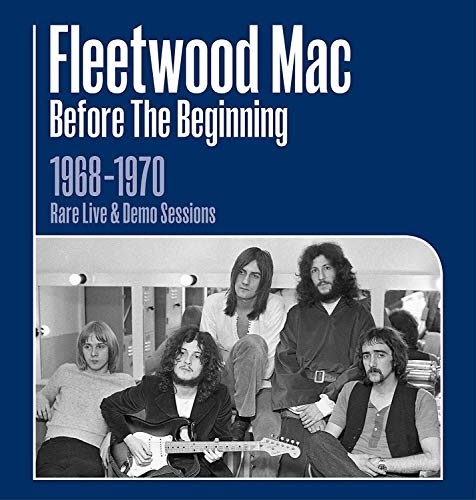 This early incarnation of Peter Green's Fleetwood Mac (Green, Mick Fleetwood, John McVie, Jeremy Spencer, Danny Kirwan) has seen more than its share of unofficially -- as well as dodgy semi-officially -- issued live material. There are high-quality bootlegs of gigs drawn from clubs and radio broadcasts. The three discs that make up Before the Beginning: 1968-1970 mirrors the two separate, three-volume LP sets of the same material. The booklet's notes claim these tapes are undated, unlabeled, and recorded who knows where. But that argument is debatable. According to Mac collectors and aficionados, the 1968 material that makes up all of disc one and part of disc two seems to be from the oft-booted 1968 Carousel gigs in San Francisco. The shows from 1970 are, according to many, drawn from the well-circulated "Bear Tapes" ("Bear" was the Grateful Dead's sound engineer) from New Orleans. Tacked onto disc three are four "demos" that aren't: they are BBC session takes of the songs "Mean Old World," cut in February of 1968 and broadcast on The Blues Roll On in July. "If It Ain't Me (Or That Ain't It)" from May and broadcast on Top Gear in June. "You Need Love" and "Talk with You" were recorded in August and broadcast on Top Gear in October.

Track for track, this set sounds compressed compared to some of the unofficial sources, with noise and some spatial dynamics removed during the "remastering" process. That said, given the bargain price, fans who don’t already have this material -- and don’t spend hours on the internet seeking out bootlegs -- should be rather astonished by the quality of the performances. Highlights on disc one include Jeremy Spencer's slide work on a series of Elmore James covers, including "Madison Blues," "Something Inside of Me," and "Got to Move." Green's Chicago mentors are clearly heard in the soulful reading of Billy Myles "Have You Ever Loved a Woman" and the original "I Loved Another Woman," wherein Green's love for Otis Rush is made plain. Disc two contains smoking versions of early rock & roll songs such as "Long Tall Sally" and "Willie and the Hand Jive." Another slide-mania barnstormer is "Shake Your Money Maker." The 1970 gigs kick off (still on disc two) with overdriven guitars on "The Green Manalishi" followed by a sublime "Albatross." The last disc kicks off with a stomping, raucous "I Can’t Hold Out" that sounds like it came from Chess studio. It's followed by a blazing "Oh Well, Pt. 1" and "Rattlesnake Shake" before slowing all the way down with the spectral "Underway," which bleeds into a choogling "Coming Your Way." The final three live cuts before the demos -- "Homework," My Baby's Sweet," and "My Baby's Gone" -- seem to come from another source altogether; they are ragged and decidedly lo-fi but the band is firing on all cylinders. The 44-page booklet by Christopher Hjort is very detailed, especially since he had little access to information. When paired with the music, the argument can easily be made for completists, though this collection should also appeal to any serious blues fan.