Canadian wunderkind Glenn Gould was the talk of the town in the late '50s and early '60s, and the "Jubilee Edition" of selected albums, with original artwork and notes, revives some of the large amount of music he recorded in those years and fills out the picture of what he was like beyond the solo Bach recordings for which he was most famous. In Beethoven he ranged from daring to completely off the wall. Later on, Gould would outrageously use the concerto format as a way of facilitating his withdrawal from concertizing, but this release was one of his most successful in the field, partly because the sheer stolidity of Vladimir Golschmann's Columbia Symphony Orchestra provides the perfect foil for Gould's excesses. He constantly seems to be racing ahead of the orchestra, seemingly almost pushing it to catch up, and the result is a crisp, fun delineation of the solo and orchestral realms. In the finale of the Beethoven Piano Concerto No. 1, where Gould's rhythmically edgy treatment of the opening solo is answered by a perfectly straight orchestral antecedent, the effect is arresting, and even in the Bach Keyboard Concerto No. 5 in F major, BWV 1056, where the oversized orchestral strings overwhelm the scale of the music, Gould keeps things lively. The liner notes by Gould himself include a defense of his unorthodox Beethoven cadenzas and generally provide enjoyable samples of his diva-esque personality, but you'll need a magnifying glass or perfectly tuned eyeglasses to read them. The remastering captures the virtues (overall power and impressive dynamic range) and flaws (annoyingly booming resonance) of the 1958 original. 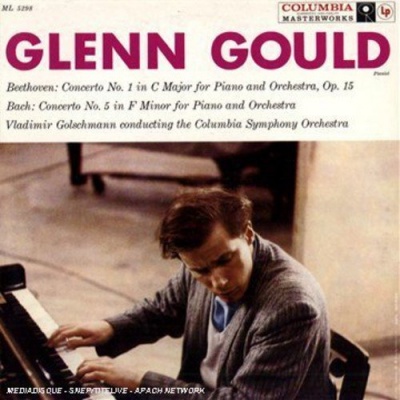