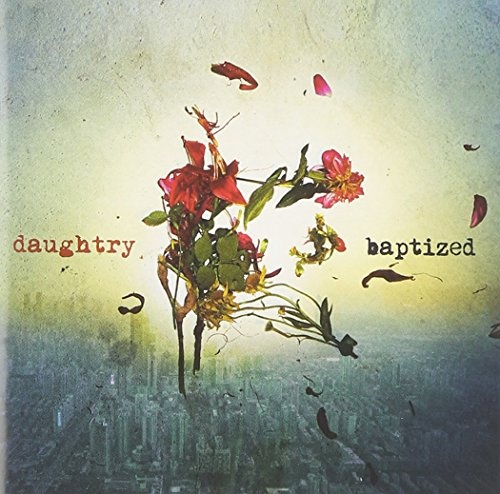 Fun does not seem to come easily to Chris Daughtry, the leader and namesake of DAUGHTRY. Even when he was the leading rocker on American Idol at the peak of its popularity, he never seemed to enjoy being on the big stage and that sourness carried over to his professional career, when he consciously chose to brood instead of party. This served him well for a while, but eventually the specter of middle age loomed, both in his personal life and in his career, as he started to stare down the horizon of a decade in the biz. Faced with slightly diminishing returns -- 2011's Break the Spell was the first DAUGHTRY record to not go platinum, or to spawn a Top 20 single -- Chris Daughtry decided to look on the bright side of life for Baptized, his fourth album as the frontman of DAUGHTRY. Baptized seems like a standard-issue post-grunge title -- the kind of heavily weighted one-word nonsense that suggests big, serious things -- but the album itself is by no means a neo-grunge throwback. Daughtry is quite conscious of what year it is, so he's happy to alternate between super-stylized soft rock sculpted on a computer -- anytime there is a power ballad, which is often, the precision is exact -- and rousing neo-roots stomps that bring to mind the insistence of the Lumineers. Folk-rock may be the fashion but Daughtry's blood flows from arena rock, resulting in such ungodly hybrids as "Long Live Rock & Roll," a song overstuffed with puns set to a big-footed stomp. Here, Daughtry forces himself to smile, just like he does in the video for the album's first single, "Waiting for Superman," and even if he never winds up with something that approaches levity, the proceedings are certainly lighter than anything he's attempted. This does make a notable difference. Perhaps DAUGHTRY are a shade more anonymous -- they're not distinguished by the love of post-grunge that made them heavier than their peers throughout their career -- but they benefit from being a shade more nimble, ready to thread now sounds into a sensibility stuck in the past. It helps that Daughtry never seems to recognize when he's getting silly: surely, that pun-ridden "Long Live Rock & Roll" qualifies, but the "boom boom boom boom boom boom boom" chorus of "Battleships" does as well, as does almost every cut here. Perhaps it's easy to laugh, but that ignores a crucial factor: Daughtry has never allowed DAUGHTRY to be silly before this record. This relative lightness makes a big difference -- it also helps that the music itself is relatively nimble -- and, ultimately, this turns Baptized into the best album he or his band has made. He's updated his sound just enough to stay relevant but, more importantly, he doesn't get in the way of a good tune.