"Cranked-up," "Rock 'n' Roll," "thick shag of strings": these are just a few of the unlikely descriptions used by the writer of the liner notes for his release in a useless attempt to justify the ways of transcription to man. But no justification is possible or even necessary. To the purist, a transcription is an abomination in the ears of God and man, and any transcription is a mortal sin against the art of Bach. But that hardly matters since this disc is clearly not for purists; it's for music lovers who want to rock with Bach. And this disc does rock, loud and hard. After some fairly snoozy years under the aging André Previn, the Los Angeles Philharmonic under music director Esa-Pekka Salonen has become one of the great virtuoso orchestras in the country, fully capable of playing Mahler, Stravinsky, Messiaen or even Bach transcriptions with fire and precision.

As you might expect, the disc starts with the most (in)famous Bach transcription of all time: the Stokowski Toccata and Fugue in D minor. Apparently, to Stokowski, Bach was a chubby German burgher with a penchant for flashy clothes and cheap jewelry: his transcription of the Toccata is overdressed, fat, and slow. Salonen gives the devil his due and grants Stokowski all the ponderous weight the LAPO can summon. He even goes so far as to slow down at the stretto just before the climax of the fugue. One imagines that Stokowski would have loved it. Amazingly enough, the rest of the disc isn't anticlimatic. The Elgar C minor Fantasy and Fugue is a moving example of Elgarian Nobilmente at its best. The Schoenberg "St. Anne" Prelude and Fugue is boisterous good fun. And the Mahler Suite is an infectious confection.

On its own terms, this disc is highly recommended. 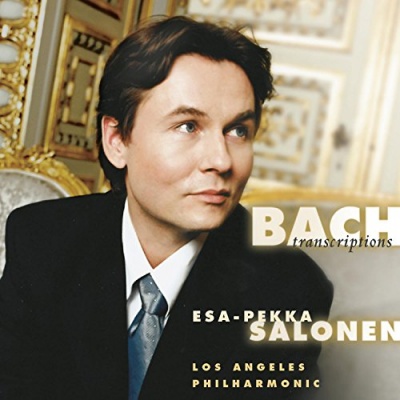