Aware Greatest Hits is a compilation drawn from the first nine Aware Records compilations dating back to 1993, which have been a proving ground for thoughtful new rock performers. By drawing together some of the most successful acts to emerge from Aware, the album brings into focus an entire trend in rock over the previous decade. If the music didn't date from the 1990s, it might be called folk-rock, since it is dominated by acoustic guitars playing over rock rhythm sections, topped by gruff-voiced singers deeply concerned with their expressive lyrics. The time period, however, requires the use of terms like "alternative" and "post-grunge." Whatever you call it, it is a wave of music that has swept to popularity, its purveyors here including Better Than Ezra, Five for Fighting, Hootie & the Blowfish, John Mayer, Matchbox Twenty (under its original name, Tabitha's Secret), Shawn Mullins, Train, Vertical Horizon, and the Verve Pipe, not to mention guest vocalist Dave Matthews, who joins Shannon Worrell on "Eleanor." Hit tunes like Mullins' "Lullaby" and Matchbox Twenty's "3am" are featured, along with demo and acoustic versions of tracks that later turned up on successful albums. Aware Greatest Hits makes the argument that a whole generation of American rockers has emerged who have much in common, and when you hear their early work together, that argument becomes convincing. (Note that the tracks by the Gufs, the Verve Pipe, and Cary Pierce are re-recordings of songs that appeared on earlier Aware compilations, while Train's "Meet Virginia" derives from a limited-edition live EP.) 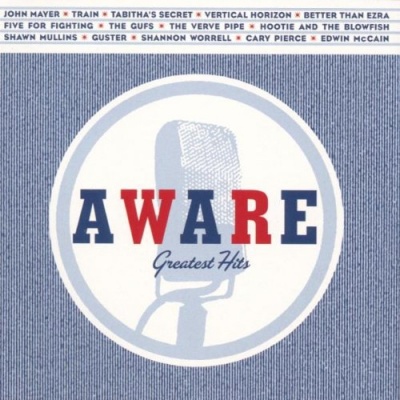