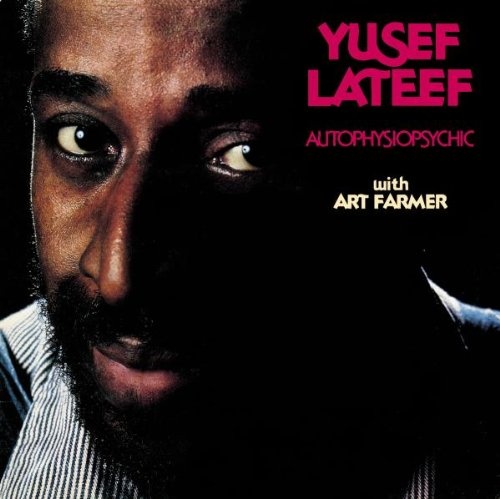 Autophysiopsychic is probably the single album that many Yusef Lateef fans either love or hate the most. Along with guest soloist Art Farmer on flugelhorn, guitarist Eric Gale, keyboardist Cliff Carter, drummer Jim Madison and bassist Gary King (except for "Sister Mamie," which features Steve Gadd and Alex Blake respectively), "Teefski" romps through five fat slices of original funk that have far more in common with the sounds of Chocolate City than with the bop sounds of 52nd Street. Autophysiopsychic is awash in the soft soul-funk-jazz sound typical of Creed Taylor's (CTI) productions in the 1970s. And even though the backing instrumentation and rhythms are not much more than mainstream R&B and funk shot through with a few oddities, Farmer and Lateef (on tenor and soprano saxes, flute and shanai) lay down solos that bite and swing so momentously that they provide musical merit to this entire project. Each seems to continually prod the other -- Lateef more robust and biting, Farmer more fluid and soft -- up to the next level. Their turns in "Robot Man" and "Look On Your Right Side" are particularly memorable, especially Farmer's closing solo in "Right Side," which seems to blend New Orleans swing with nursery-rhyme sing-song simplicity. Not the most typical album in Lateef's wide-ranging catalog, but certainly the most fun.