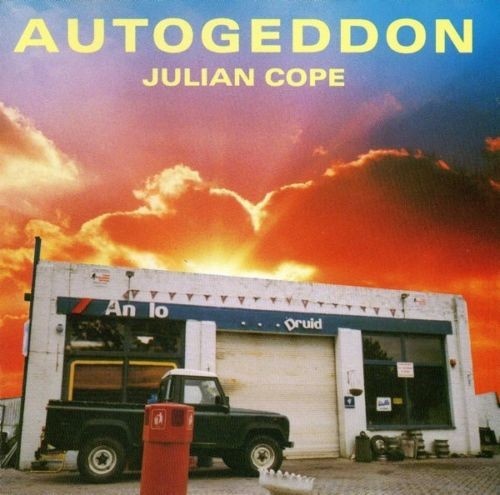 Reversing the trend of lengthy Cope releases, Autogeddon is only 46 minutes long but just as powerful and varied as Cope's other early-'90s releases. Concluding the trilogy started by Peggy Suicide and Jehovahkill, Autogeddon, as the title gives away, targets cars, specifically as a metaphor for environmental destruction. Combined with the continuing focus on heathen religious practices and ancient monuments (the first part of "Paranormal in the West Country" was, in fact, recorded in the West Kennet Longbarrow in Wiltshire), the album is almost a summation of Cope's current interests as well as standing on its own. Rooster Cosby and Donald Ross Skinner return, along with Moon-eye, longtime acquaintance becoming regular collaborator Thighpaulsandra, and Mavis Grind, who eventually became Cope's key musical partner in later years. Together they help Cope once again do the business, covering the varied musical ranges he favors with skill and style, even if the production isn't quite as thick and strong throughout as on previous releases. Cope notes that all tracks were first takes, and there's more than a little studio conversation and discussion cropping up here and there. Then there's the perhaps unintentional laugh/gulp/howl at the start of "Ain't No Gettin' Round Gettin' Round," his rueful and witty complaint about needing a car to travel. What stands out most, though, is Cope's continuing ability to sing and perform at the top of his game, all while specifically and fiercely targeting what he truly hates. Opening cut "Autogeddon Blues" envisions more than a few dead bodies along the way, for a start. At the same time, one of his most affecting, pretty songs turns up as well: "Don't Call Me Mark Chapman," which details a cryptic murder and/or suicide situation with both black humor and almost unnerving calm. There's glam guitar homages on "Kar-Ma-Kanik" and epic space rock on "s*t*a*r*c*a*r," and it all shows Cope still following his own muse with total gusto.