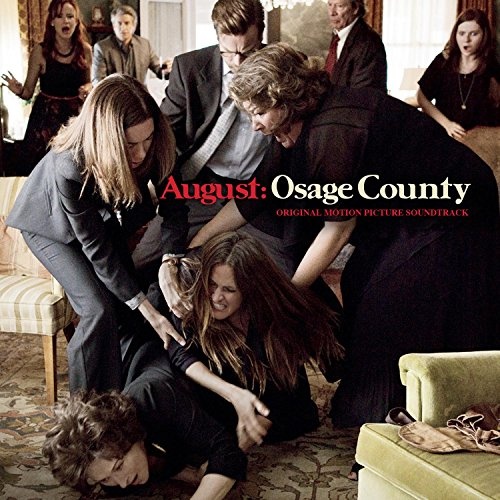 The original score for August: Osage County was written by Argentine composer, producer, and multi-instrumentalist Gustavo Santaolalla. It is not to be confused with this volume, however, which is simply the soundtrack to the film. (The score -- brilliant, moving, and elegant -- is only available digitally.) There are 14 tracks here by a variety of artists. The set opens with "Hinnom, TX," a sad, dour little song by Bon Iver. There is also an acoustic version of Kings of Leon's "Last Mile Home," and a pair of classic rock jams by Eric Clapton ("Lay Down Sally") and Billy Squier ("The Stroke"). Among the set's high points are "Gawd Above," a bluesy, rockin' number by John Fullbright, (co-written with Denton Welch), and the moody Americana of "Violet's Song" by JD & the Straight Shot. Things get really strange when four tracks at the album's center are actually cues by film composer Adam Taylor (A. Taylor), followed by the saccharine "Can't Keep It Inside" by Benedict Cumberbatch. Finally, there are three cues by Santaolalla and longtime collaborator Anibal Kerpel that are included to grace the album's final quarter, but not before Quincy Jones' "Streeet Beater" (aka the Sanford and Son theme song) takes the film out referencing pop culture from the 1970s! This is one of the most erratically sequenced soundtracks to appear in recent decades, but may resonate with the film's core audience.