At the Octoroon Balls: String Quartet No. 1 Review

Will Wynton's omnivorous appetite ever be satisfied? Seemingly enthralled with the string quartets of Bartók, he tries to write one of his own that basically takes off upon Bartók's (and America's Charles Ives') own methods of drawing upon vernacular language to create thoroughly contemporary classical music. While Bartók's inspiration was Hungarian folk music, Marsalis, like Ives, seems to draw upon American fiddle tunes and blues. Sounds interesting, but Wynton's reach has again exceeded his grasp over seven, often disjointed movements that stretch some 45 minutes - a lot longer than Bartók dared go. Wynton employs a lot of slithering portamentos, occasional passages of dissonance in a tonal framework, flinging ideas out there that are not developed or even hammered into a groove. The best movements are the rambunctious fifth, where the nod to Bartók is explicit in its insistent rhythms and glides, and the charming, straight-forward ragtime of the seventh. Though the liner notes are thankfully not by Stanley Crouch, they are of little help in determining the motivations behind the piece, and the Orion String Quartet works hard to pump life into this lofty attempt to jump genres. Classical listeners will make the associations more readily than jazz fans, who will be hard-pressed to relate this to anything Wynton has recorded before 1998. The disc is filled out by Marsalis and musicians from the Chamber Music Society Of Lincoln Center playing a suite from Marsalis's A Fiddler's Tale - which is essentially the music stripped of the narration - and the slithering, subtly swinging metamorphosis of Stravinsky's L'Histoire du Soldat holds up a lot better this way. This was the third of Marsalis's eight releases in 1999. 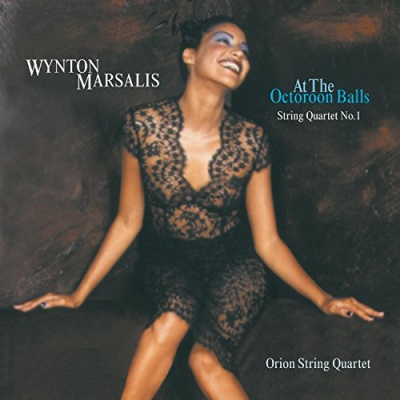 At the Octoroon Balls: String Quartet No. 1 Album Information