Thanks to the research that went into the box set The Complete Miles Davis/John Coltrane Sessions there's a definitive Newport 1958 date that features the debut live performances to the Miles Davis Sextet's two newest members: drummer Jimmy Cobb and pianist Bill Evans. The gig was part of a festival tribute to Duke Ellington, but that didn't stop Davis from showing off -- aggressively -- what his new band was capable of (six months later he would show the world when the band went to record Kind of Blue). This is a revelatory performance for fans of Evans. When Cobb kicks off into Charlie Parker's "Au-Leu-Cha," the tempo is breakneck. Davis' solo is all fire, pure heat, and inspiration. The melody goes by in a blink, and Cobb and Chambers carry the dictum to go faster as Davis gives way first to Coltrane, already moving his angular lines to the harmonic breaking point and doing them not in scales but in modes, fast and footloose. He's down in the groove before giving it to Cannonball Adderley to show off his bebop chops -- which he possesses in spades. He's out of the Bird book to be sure, but his tone is stunning and he's loose, free as a bird as he leaps from one idea to the next before the melody shifts the tune back to Earth for only a second. The sextet doesn't stop when it literally rocks through Thelonious Monk's "Straight No Chaser." Evans' harmonic invention on the tune couldn't be further from the composer's, but it hardly matters. His melodic fire and ability to move tonal mountains in the harmonic intervals is near effortless. Coltrane's solo is notable in that he's squeaking and squawking for the first time on record, and Adderley's for how rich and melodic it is. By the time Evans gets to his solo, he's down in Monk's blues all right, but they're so ornate and beautiful, they swing, sway, and are full of color, as nuanced as they come. There is no academia in his approach -- it's all emotion and sophistication. The rest of the set follows suit: "Fran-Dance," "Two Bass Hit," "Bye Bye Blackbird" (which has never sounded like this before or since), and the blistering "The Theme" all burn with white heat. It's obvious Davis was pulling out all the stops for this audience, bringing down the house, and perhaps realizing himself just what this band was capable of musically. Who knows? It doesn't matter, fans can finally have an accurate record of this performance that has been scattered over other issues, misdated, miscredited, and badly mastered. This volume finally sets straight what happened on that afternoon in 1958 at the Newport Jazz Festival. 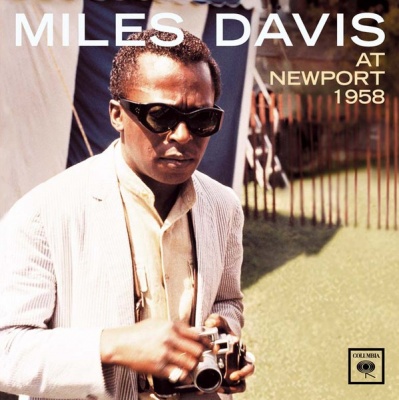