At Home with Friends Review

The "…and friends" identifier usually indicates a failing creative impulse; a veteran artist typically goes this route when he/she enters a fallow period and wants to juice up sales by dropping big names. So it's all the more pleasing to be able to report that violinist Joshua Bell has turned the genre inside out. For one thing, this album is not called Joshua Bell and Friends, but Joshua Bell: At Home with Friends, and if one is to believe his introductory note in the booklet it grew from actual soirees in the violinist's New York apartment. These events were not typical chamber music read-throughs, but eclectic meetings of musical minds that might include anything from established classical repertory to bluegrass. Both of those genres show up on the album (and Bell is to be commended for recognizing the fabulous talents of progressive bluegrass mandolinist Chris Thile), along with Latin jazz, Italian film music, pop, rock (from Regina Spektor, Bell is definitely treading into new territory here), Indian classical music (in a duet with Anoushka Shankar), tango, John Dowland as interpreted by Sting, Italian music, and classic Broadway sounds. What makes all of this work is Bell's fearless experimentation in inserting his violin into these various types of music. The album is not universally successful; Sting's contribution in Dowland's "Come Again," which he recorded more naturally on his own disc of Dowland's music, sounds phoned in even if it was recorded in a single take. But this is in the nature of experimentation, and other tracks, unexpectedly including the Spektor original "Left Hand Song" and the Frankie Moreno version of "Eleanor Rigby," resemble nothing that's been done in the past with a violin. A curveball is on hand with the use of the Zenph Re-Performance software to create a duet between Bell and Sergey Rachmaninoff in the second movement of Grieg's Violin Sonata No. 3, and an unexpected synergy surfaces between Bell and Kristin Chenoweth in "My Funny Valentine" (track 6). In the main, you have absolutely no idea what's going to happen next, and the album lives up to the expectations Bell has set for himself as a classical artist with a unique connection to the surroundings of popular music. A very fine crossover release. 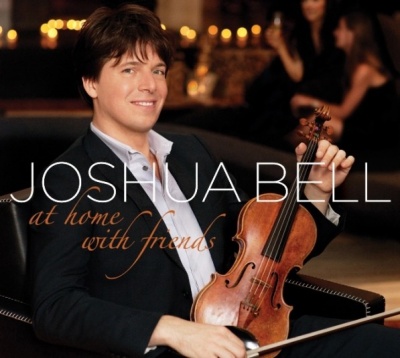 At Home with Friends Album Information