Barbara Cook's third solo album, At Carnegie Hall, which followed her second, Sings From the Heart by 16 years, marked a crucial turning point in her career. From the early 1950s to the early 1970s, Cook had been a Broadway star, her most notable appearances being in The Music Man (1957) and She Loves Me (1963). But as she reached her mid-40s, the stage offers began to dry up, and she attempted a transition to nightclub and concert work. A stint at the New York club Brothers and Sisters attracted concert promoters and led to an offer to appear in concert at Carnegie Hall on January 26, 1975. Columbia Records recorded the show, and the exposure this album brought allowed Cook to embark on the second phase of her career, one that carried her through several subsequent decades. It's easy to understand why when you listen. Cook is given strong musical support by Bill Brohn's arrangements and Wally Harper's conducting, and she puts together an excellent mixture of material that comments on her past (a trio of numbers from She Loves Me, "He Was Too Good to Me," the song sung most impressively on her first album); borrows strong but little-known material from other shows, such as "Who Are You Now?" from Funny Girl; acknowledges contemporary pop in Judy Collins' "My Father" and Leon Russell's "A Song For You"; and introduces specially written numbers by Harper. One might have hoped for more in terms of audience interaction on a live recording (perhaps her stage remarks have been edited out), but anyone listening to this album would wish to have been at the show, and would anticipate Cook's visiting in a concert hall nearby soon. 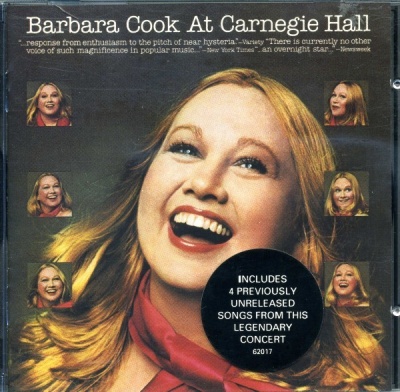