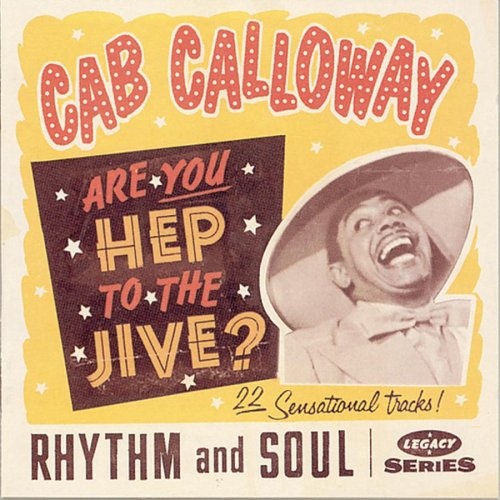 Cab Calloway was a gloriously outsized manifestation of all that was frantic in the first full flowering of prohibition-era jazz. Dressed with all the flash of a brand new Cadillac, leading a crack band who could swing and sway with both abandon and precision, and spinning demi-monde tales of wild good times complete with illegal party favors, Calloway was a joyous personification of America's id at a time when such celebrations were hardly the stuff of common currency. Calloway's most popular music was recorded during the early to mid-'30s, but when more polished swing sounds supplanted his earlier style, Cab wasn't afraid to move with the times and led a top-notch big band capable of playing more contemporary music while still delivering the free-wheeling punch Calloway's personality demanded. Are You Hep to the Jive? is a great compilation from Columbia's Legacy series that brings together 22 sides Calloway waxed for Vocalion, Okeh, and Columbia between 1939 and 1947, and shows beyond a doubt Cab's muse was still in fine fettle at this point in his career. Calloway's band was filled with first-class talent, and the likes of Dizzy Gillespie, Chu Berry, Milt Hinton, and Jonah Jones can be heard on the selections included here, but as great as the band is (and they swing with potent, joyous force throughout this disc), it's Calloway's 100-proof charisma, his unabridged lexicon of jive speak and his top-shelf scatting skills that bring this collection to life, and the fine madness of "Are You All Reet?," "A Chicken Ain't Nothin' But a Bird," "Tarzan of Harlem," and "Who's Yehoodi?" is as satisfying as a cold drink on a warm day. If this isn't quite the definitive Cab Calloway disc, Are You Hep to the Jive? is an excellent overview of his work in the '40s, and it's solid fun from first note to last.