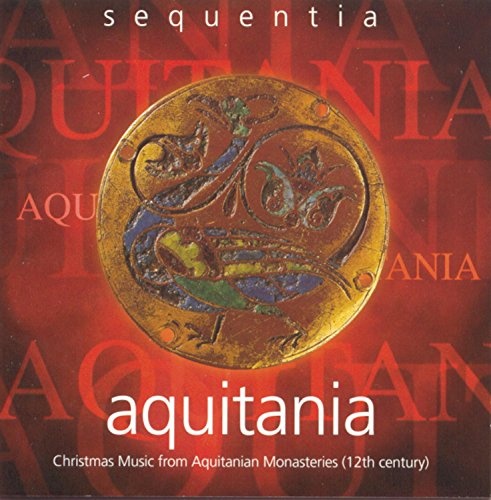 The albums of Aquitanian chant and polyphony released by the medievalist ensemble Sequentia -- Aquitania was the second -- are model presentations of music nearly a millennium removed from us in time. Aquitania (or Aquitaine), in what is now southwestern France, was one of the most prosperous regions of the medieval world. From its monasteries flowed intricate and widely influential music, including Europe's first experiments in polyphony. The selections on Aquitania consist of chants and two-part pieces, mostly on themes of Mary and the Nativity. All the vocal music is unaccompanied; some is sung solo, some by a male or female choir, and some antiphonally between solo and choir. The poetry is exuberantly original and devotional, and this album helps the listener realize that the music may be described the same way. Some of these pieces have been reconstructed by Sequentia from the sketchy notation in which they have come down to us.

The performances themselves are musically persuasive; listeners can't help but get a feel for why the anonymous monastic composers of this music might have applied such structural features as dissonant (or, in the terminology of the time, "imperfect") intervals where they did. The liner notes by Sequentia founders Benjamin Bagby and the late Barbara Thornton perfectly set up the music's context. If you studied Aquitanian polyphony as part of a college music history survey, you may find that you learn more from their three pages of exposition than you did from the hours of dry musical examples through which this repertory is usually taught. Bagby and Thornton address such topics as why the whole panoply of multipart music in Europe should have arisen in this region, and they informatively define the act of composition in this era as "an act of image-making around a mythological, philosophical, or theological theme." In the service of this image-making, a poet or composer may "embroider on word-meaning (usually biblical in origin) through textual troping, or through the colorations of musical-modal figures, of tessitura, or even the extreme means of having two voices sound intervals simultaneously." There may be a term in there that you have to look up in a glossary or dictionary, but those sentences get to the center of the medieval expressive mind.

Christians may well find this album revelatory of profound religious sentiments, while even those of a pagan frame of mind will be impressed by the natural imagery in some of the texts ("From the mountain the stone is cut, yet no hand is interposed by way of help/From the earth rises the spring, from the daughter is born the Father and creator of all") and by the enthusiastic musical responses to such imagery. Major props go to text translator Peter Dronke for rendering the Latin texts in accessible English and especially for preserving the "Jesus Christ, Son of God the Savior" acrostic in his English translation of St. Augustine's apocalyptic Erythrean Sibyl's Verses from The City of God. For its beauty and educational value, Aquitania was a bargain at full price, and it's gratifying to find that BMG sensed enough of a demand for the album to reissue it in its budget line. Bravo.