Angel of the Night Review

Angela Bofill proved herself extremely adroit at doing Latin, jazz, and R&B with equal finesse on her debut, Angie. Angel of the Night is the highly anticipated sophomore set originally released on GRP when it was distributed on Arista. With such a comfortable style well suited to Bofill's voice, this doesn't veer that far away from the work on the first album. The first track, the immediately classic "I Try," is beautifully sung, dramatic, and offers no false moments. The title track is just as effective in a gentle and lilting way. Angel of the Night's producers David Grusin and Larry Rosen, who also worked on Jon Lucien's 1973-1975 albums, cover some ambitious territory with a rich-voiced, quirky singer here as well. The epic "The Voyage" has the producers' sense of drama, a perfect match for Bofill's deliberate delivery, which is oddly though sweetly reminiscent of Lucien. "What I Wouldn't Do (For the Love of You)" and "The Feelin's Love" bring her to a more customary, sleek R&B material with her trademark vocals making them even better. The only thing that qualifies as a miss is a disco-style take on Thom Bell and Linda Creed's "People Make the World Go 'Round." It's not that bad, though. Angel of the Night is one of Bofill's finest and most charming albums. Any fan of sophisticated late-'70s R&B/Latin jazz need to have this in their collection. 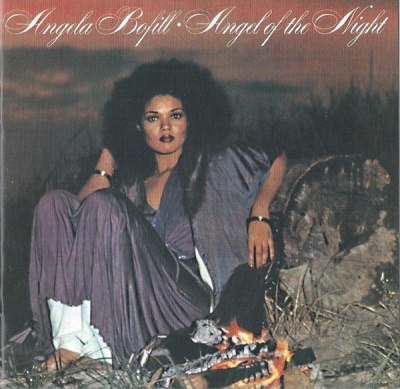 Angel of the Night Album Information