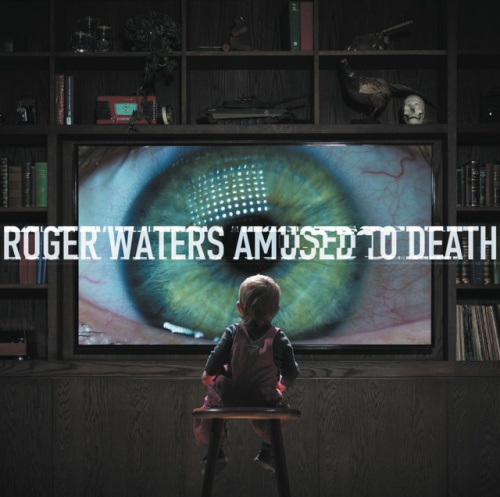 War is Roger Waters' great muse, the impetus for so much of his work, including the semi-autobiographical 1979 opus The Wall. The Final Cut, his last album with Pink Floyd, functioned as an explicit sequel to The Wall, but 1992's Amused to Death acts as something of a coda, a work where Waters revisits his obsessions -- both musical and lyrical -- and ties them together with the masterful touch of a mature artist. Certainly, Waters' narrative of a society filtering all manners of ugliness through a television screen isn't as sci-fi silly as that of its immediate predecessor Radio K.A.O.S., but a greater point in its favor is that it's a richer affair than that stiff, synthesized relic of the late '80s. Working with Patrick Leonard -- a veteran collaborator of Madonna's who also dabbled with the latter-day David Gilmour-led Pink Floyd -- Waters gives Amused to Death forward momentum, an aspect conspicuously absent from the still, meditative The Final Cut and Pros and Cons of Hitchhiking, both of which seemed to be comprised of song poems. The tunes on Amused aren't quite hooky or melodic but they do have structure, as does the production by Waters, Leonard, and Nick Griffiths. The tapestry of found sounds, choirs, televisions, washes of organ, lonely acoustic guitars, and blues leads by Jeff Beck does recall Floyd at their '70s peak, but Amused to Death sounds grander and more expansive; it's a creature of the CD age, using up every one of its available 72 minutes. At this length, it's a mere ten minutes shorter than The Wall, and although it can sometimes feel indulgent, it never feels excessive. Unlike the other two Waters solo albums -- or The Final Cut, which is a Waters project masquerading as a Floyd album -- Amused to Death feels cohesive and complete as an anti-war rock opera. If it winds up being Waters' last original rock album, so be it: it is a masterpiece in the sense that it brings together all of his obsessions in one grand, but not unwieldy, package.