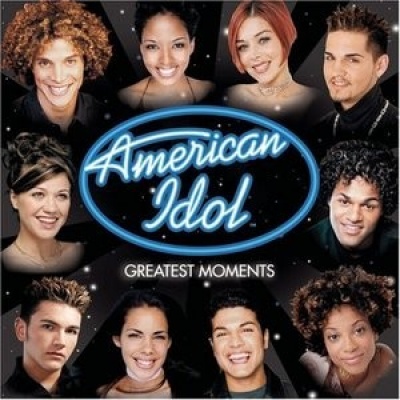 Arriving as soon as possible after the phenomenal success of Fox's American Idol: The Search for a Superstar and just before the American Idol national tour begins, American Idol: Greatest Moments collects some of the ten semi-finalists' definitive performances from the series. Though it's strange for any of these singers to appear on a greatest-hits collection before the winner, Kelly Clarkson, even released her debut album, it isn't all that surprising -- with the tremendous amount of exposure the show attracted, even the most marginally talented semi-finalists still have a few minutes of fame left. As with the show itself, where each of the performers got more or less an equal shot at proving their talent, American Idol: Greatest Moments is relatively democratic: The winner and runner-up, Clarkson and Justin Guarini, get two songs apiece, the rest of the final ten each get one song, and the album closes with an ensemble number, the lackluster rendition of "California Dreamin'" all ten finalists performed on American Idol's final episode. Though democracy is an admirable trait in other ways of American life, in American Idol: Greatest Moments it does some of the more talented semi-finalists a disservice; while it's nice to commemorate Jim, AJ, and EJ's tenures on the show with their versions of "Easy," "I'll Be," and "My Cherie Amour," respectively, it also would've been nice to hear more from some of the more memorable contestants, particularly Tamyra Gray, whose "A House Is Not a Home" was one of the show's highlights (but then, nearly every time she sang it was a highlight), and Christina Christian, whose cool, languid style -- represented here by "Ain't No Sunshine" -- just didn't translate well in a contest designed to discover the next Whitney Houston or Justin Timberlake. Some of the selections are also somewhat questionable: Nikki's performance of "Piece of My Heart" is adequate, but doesn't showcase her voice as well as her version of "I'm the Only One" did just a few weeks later. As usual, Guarini and Clarkson sound polished and professional on their signature songs, "Get Here" and "Respect." However, starting the album out with their performances means the album tends to go downhill from there. Craftily, American Idol: Greatest Moments doesn't feature Clarkson or Guarini's renditions of the official American Idol songs, "Before Your Love" or "A Moment Like This" -- you'll have to pick up their respective albums for those. Overall, the collection is definitely a product of the show that inspired it, which will doubtlessly please the fans of the newly minted pop stars on it.