All the Way: A Decade of Song Review

There aren't a lot of greatest-hits albums with seven new songs, which is exactly what All the Way: A Decade of Song is. There are just nine hits on this hits collection, and of those, only a handful -- "If You Asked Me To," "Beauty and the Beast," "The Power of Love," "Because You Loved Me," "It's All Coming Back to Me Now," and "My Heart Will Go On" -- were huge hits in the U.S. Her first American hit, "Where Does My Heart Beat Now," isn't here, nor is her duet with Barbra Streisand, "Tell Him." Naturally, this means it's not a definitive collection, but rather an unsatisfying album that feels suspiciously like a piece of product. The best of the hits, like the Meat Loaf-ian epic "It's All Coming Back to Me Now" and "My Heart Will Go On," are certainly among the best adult contemporary songs of the decade, and the new stuff would pale in comparison, even if it was very good -- which, by and large, it is not. Two numbers, the danceable "That's the Way it Is" and the pretty ballad "If Walls Could Talk," work, but the cover of "The First Time Ever I Saw Your Face" falls flat and "All the Way," complete with old vocals from Sinatra, is a disaster. The remaining three aren't bad, but they're not particularly memorable, especially compared to the hits. And that's the problem with All the Way -- if it had been a straight hits collection, with "That's the Way it Is" and "If Walls Could Talk" added to the end, it would have been fine, but padding it with nearly a full album worth of new material hurts it. 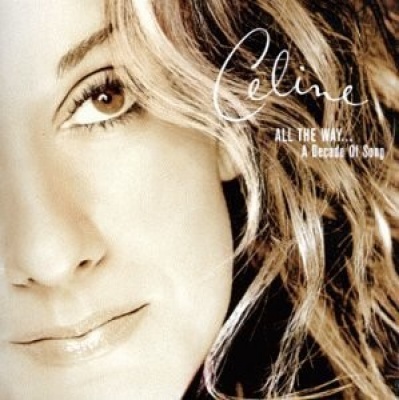 All the Way: A Decade of Song Album Information