All That We Let In Review

Nearly 20 years on, and Indigo Girls are still spinning their dualistic tales of love, anger, and life. Over the years, the formula has had its bouts with rigidity -- for a while there, it even threatened to reach obsolescence (think of the phoned-in late-'90s effort Shaming of the Sun). But Emily Saliers and Amy Ray did a wise thing with 2002's Become You, returning to the threads of personal experience that had made their folk-rock tapestry so strong in the first place (and reducing their sound). All That We Let In continues Indigo Girls' throwback arc, opting for just their longtime band with a few well-placed guests. (For example, pedal steel player Mark Van Allen and cellist David Henry make Saliers' darkly searching "Come On Home" a particularly velvety moment.) All That We Let In has some fun before getting to the serious stuff, opening with a pair of strong tracks taking different routes to a rootsy hook. Carol Isaacs' organ shines on the warm and inviting "Fill It Up Again," which despite musing about getting dumped does so with the promise of refueling and hitting the open road. And despite it being the same old trick, darn it if it isn't comforting to once again hear the intertwined yearn of Saliers and Ray's harmonies. Ray's "Heartache for Everyone" opts for a skipping ska off-beat, in its own way suggesting the 1986 Housemartins jingle "Happy Hour." "Perfect World" is a well-crafted Indigo Girls single, broadcasting its message of universal hope with earthy lyrical allusions and tasteful touches of accordion and recorder. There are still demons in their world, which they take on with typical pluck. "Dairy Queen" deals again with relational drama, while "Tether" is live-wire raw with its Crazy Horse distortion and desperate foment. "Do we tether the hawk, do we tether the dove?" Ray and guest vocalist Joan Osborne wonder. A neighbor spits out his chaw. "We need a few less words dear," he says. "We need a few more guns." Like the best Indigo Girls work, All That We Let In continually dwells on the dynamic of internal, emotional tumult and outward-looking, world-wondering fervor. Its strongest example of this comes in the album's twilight. As Saliers' inner Joni Mitchell resurfaces for the heartening but bittersweet prodigal friendship number "Something Real," Ray's trademark activist fire smolders mournfully in "Cordova"'s darkness. It's the album's truest stretch, and proves Indigo Girls haven't lost a step even as they look back to their musical roots. 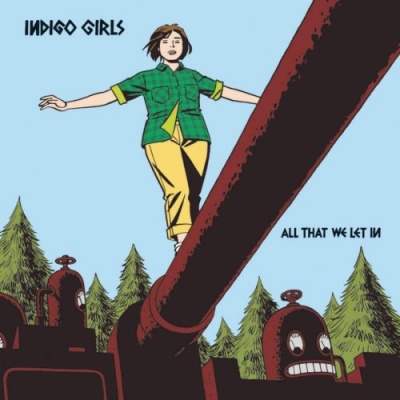 All That We Let In Album Information