All Shook Up Review

Cheap Trick's first genuinely disappointing album (1979's Dream Police wasn't bad, it just wasn't up to the level of the first four), 1980's All Shook Up is pretty much a complete botch. Much of the blame belongs to producer George Martin, who, for all his brilliance, was simply a wrongheaded choice for these brash power poppers; his production style simply doesn't translate. Unfortunately, primary songwriter Rick Nielsen has to shoulder his portion of the blame as well: the band's sixth album in under four years shows that the guitarist is starting to run out of both hooks and interesting lyrics. Too many songs are based around half-baked braggadocio like "High Priest of Rhythmic Noise" and "World's Greatest Lover," without the snarky wit that elevated their earlier albums, and the tunes themselves are substandard boogie deficient in both head-bobbing riffs and singalong choruses. "Baby Loves to Rock" is a glad-handing rocker with a certain resemblance to T. Rex's classic string of hits, but it's not enough to save the album. [An Expanded edition of All Shook Up was released in 2006 with five bonus tracks.] 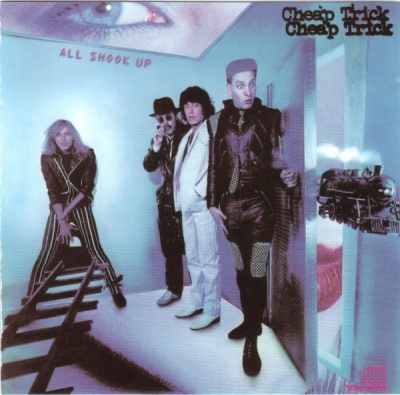 All Shook Up Album Information