All Over the Place Review

While the Bangles would later embrace a radio-friendly pop production style (and enjoy attendant commercial success) that separated them from their early peers, they were the only figures from the L.A. paisley underground scene who would go on to become genuine multi-platinum rock stars, and while their first full-length album, 1984's All Over the Place, showed that some of their rough edges were already being buffed away, of their major-label output it's the record that most openly embraces the folk-rock and garage rock influences that fueled their earliest music. Vicki Peterson's lead guitar and the band's stellar harmonies are the vehicles that drive these 11 songs, and if producer David Kahne was already pushing the group in a more commercially ambitious direction, there's no disguising the psychedelic guitar figures on "Dover Beach" or the Byrds-meets-Raiders jangle of "Tell Me," and the choice of the Merry-Go-Round's "Live" as a cover is especially telling. All Over the Place is also the Bangles' most unified full-length album; Susanna Hoffs hadn't yet been singled out as the star of the show, and the round-robin lead vocals, stellar harmonies, and tight, concise arrangements make them sound like a real-deal rock band, and the set's gentle but insistent sway from British Invasion-styled rock and West Coast pop feels natural, unforced, and effective. And when drummer Debbie Peterson and bassist Michael Steele feel like rocking out, the Bangles generate a lot more heat than they're usually given credit for, most notably on "Silent Treatment." The Bangles' second full album, Different Light, would sell a lot more copies, but All Over the Place is easily their best and most satisfying LP. 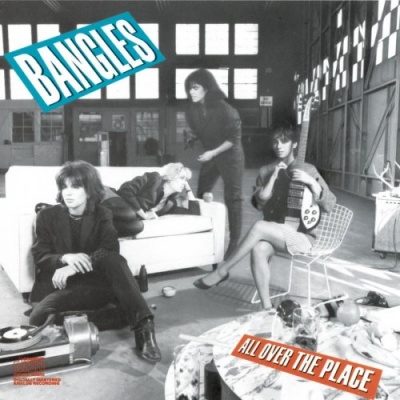 All Over the Place Album Information