All I Ever Wanted Review

Thankfully, All I Ever Wanted is not Kelly Clarkson's atonement for insisting on releasing the dark, gothic rock record My December against the wishes of label boss Clive Davis in 2007 -- well, at least not entirely. All I Ever Wanted doesn't completely abandon the tougher rock edges of My December, but it does ditch the brooding in favor of angry spunk, all the better to prove that the girl who sang "Since U Been Gone" is back. And she is -- quite self-consciously on "My Life Would Suck Without You," the first track and first single on All I Ever Wanted, a song designed by Max Martin to be an explicit sequel to his "Since U Been Gone." It's effective, if a bit clinical, running contrary to Clarkson's greatest gift: her genuineness. My December might not have quite worked, but its messiness seemed an authentic reflection of a girl next door sorting through the aftermath of turning into an unexpected star and much of All I Ever Wanted is the opposite, attempting to run the most likeable pop star of the new millennium through the mill. Fortunately, it's possible to dampen Clarkson's spirit -- nobody could survive four Ryan Tedder collaborations without being brought down into his simpering murk -- but not to break it. She can break through Martin's machinations on "My Life" and comes pretty close to breathing some life into Tedder's cold R&B approximations, but those chilly sheets of synths don't suit her. Kelly is at her best when she's belting out a big chorus backed by loud guitars, or even singing a piece of pure pop like "I Want You," as effervescent a tune as she's ever sung. About half of All I Ever Wanted is as good as this and some of it even touches on Clarkson's hard rock infatuation and improves it, particularly on the bubblegum punk "Whyyawannabringmedown" -- complete with Kelly affecting a hysterical Johnny Rotten snarl -- the arena rocker "Don't Let Me Stop You," and "All I Ever Wanted," which turns the disco bass of Spoon's "I Turn My Camera On" upside down. Tellingly, Kelly takes two Katy Perry-written numbers (both produced by Howard Benson)-- "I Do Not Hook Up," co-written by new American Idol judge Kara DioGuardi, and "Long Shot," co-written by Glen Ballard -- and goes a long way in illustrating why she's a better pop star. Kelly sounds impassioned and invested in these numbers, selling every one of the skyscraper hooks, but better still she sounds relatable, pulling listeners into a song instead of keeping them at a distance. This is a rare talent and while it's not perfect, largely due to those dreary Tedder tunes, much of All I Ever Wanted does justice to Clarkson's considerable skills. 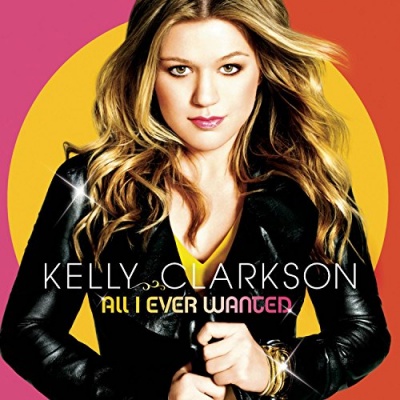 All I Ever Wanted Album Information