On Ali e Radici, his first all-new album in four years and tenth album overall, Italian singer/songwriter Eros Ramazzotti once again worked closely with longtime collaborator Claudio Guidetti, who is credited as co-producer and with co-writing ten of the 11 songs. The result is in many ways a typical Ramazzotti album. The songs are both lyrical and vocal showcases for Ramazzotti, and though the music is secondary, it's nonetheless amazing -- a symphonic style of pop/rock whose string arrangements are the work of Paul Buckmaster, a master whose illustrious career spans several decades, going all the way back to early-'70s pop/rock classics by Elton John, Harry Nilsson, and Carly Simon. Moreover, Ali e Radici is a dynamic album that ranges from the album-opening kick-start of "Appunti E Note," to the tailor-made hit single "Parla con Me," to the heart-touching ballad "L'Orizzonte," to the lilting piano pop of "Affetti Personali," to the soaring power ballad "Ali e Radici," to the surging symphonic rock of "Bucaneve," to the orchestral highlight "Nessuno Escluso," to the edgy electro-rock of "Non Possiamo Chiudere Gli Occhi." While all of this is, in many ways, typical for a Ramazzotti album, his post-millennial output in particular, Ali e Radici is a better all-around effort than predecessors such as Calma Apparente (2005) and 9 (2003), which are at times rote and random. In contrast, Ali e Radici sounds inspired and focused, as if the four years since Calma Apparente helped refresh Ramazzotti's album-making creativity. It also might have helped that Ramazzotti used the time off to release e2 (2007), a double-disc greatest-hits compilation comprised partly of newly recorded versions of past hits -- collaborative versions that are relatively experimental in style, perhaps a reflection of his desire to break free of audience expectations. In any event, Ali e Radici is Ramazzotti's best overall album in years, and while it's not brimming with potential smash hits (the perfect lead single "Parla con Me" being the exception), it's definitely filled with highlights and lacking the filler that sometimes found its way onto previous albums. 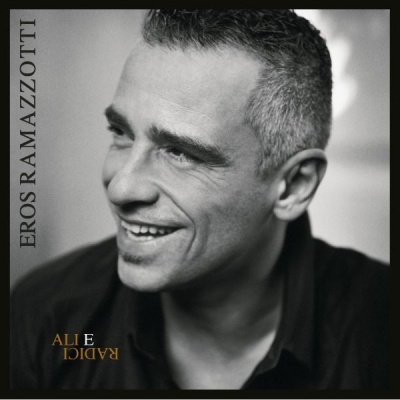