Gaby Moreno is an L.A.-based, Guatemala-born singer, songwriter, and producer. After a wide-ranging handful of solo albums full of music that cuts across Latin and European traditions, blues, show tunes, country, and rock, she issued ¡Spangled! in 2019, a widely celebrated multilingual collaboration with composer/arranger Van Dyke Parks. It comprised songs from the three Americas, celebrating possibilities, perceptions, and cultural as well as economic roadblocks. The self-produced Alegoría offers a commanding lyrical palette no less authoritative and edifying. Moreno wrote these songs during the pandemic. Sung in English and Spanish, they reflect themes of desolation, nostalgia, hope, and love. She recorded them with a cast of her favorite session players.

Opener "Nobody's Wrong" finds her rhythm section -- drummer Sebastian Aymanns and bassist Kimon Kirk -- in the company of go-to guitarist Marc Ribot and jazz organist Larry Goldings. The track crisscrosses rockabilly and country in a biting shuffle. Moreno's lyrics are a paean to cooperation, restraint, and tolerance. "Cuando Nadie Miraba" is a mysterious, noirish minor-key waltz whose title translates as "when no one is looking." Her alternately fingerpicked and strummed acoustic guitar and rhythm section are appended by the spooky lead guitar of David Garza and the keyboard atmospheres of Patrick Warren. The following "Til Waking Light," co-written with Nashville songwriters Jennifer Hanson and Jennifer Schott, is a hybridized meld of Texas country and Mexican cumbia; a waltz, it showcases the seamless interplay of both guitarists in its heartbreaking verses. "Si en el Fondo" (translation: "yes, deep down") is a breezy, summery pop/rock song in Spanish calling for direct communication between lovers. Moreno employs her glorious falsetto atop the shimmering B-3 of Tyler Chester and the slide guitar of Greg Leisz. Star mandolinist Chris Thile booked Moreno to play his NPR program Live from Here; he returns the favor on the romantic country waltz "Lost on a Cloud." "Maybe Today, Maybe Tomorrow" was co-written with Jesse Harris. It carries a distinctly cinematic vibe with its drifting Latin-ized surf guitars, rumbling tom-toms, and spacey strings; it would not have been out of place in barroom scenes of True Detective. Rachel Eckroth and Noah Georgeson assist Ribot on "Soñar Otra Vez," a dreamy, elegant romantic ballad that weds the dramatic traits of Roy Orbison and Julietta Venegas. Written with music theorist and historian Martha Gonzalez, it becomes a psychedelic tango thanks to Ribot's guitar playing; its passionate lyric showcases the dynamic range in Moreno's singing. Closer "El Merendero Gratuito" initially sounds like it could be Lydia Mendoza or even La Marisoul singing a forlorn ranchera with a band of mestizo vaqueros in a cantina. Co-written with her grandmother, it is performed in duet with Garza on guitar and piano. Alegoría is wonderful, evocative, searing, and true; it is Moreno's first recording to fully showcase her developed sophistication as a singer and a producer, as well as underscore her maturity as a songwriter. Get it. 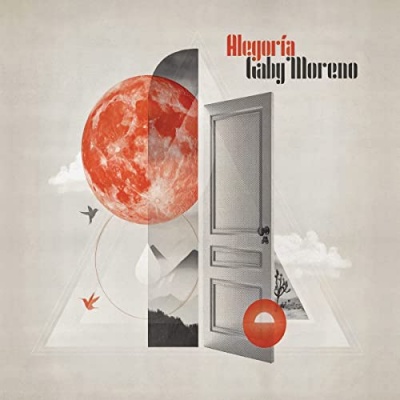