Fierce Kate Bush fans who are expecting revelation in Aerial, her first new work since The Red Shoes in 1993, will no doubt scour lyrics, instrumental trills, and interludes until they find them. For everyone else, those who purchased much of Bush's earlier catalog because of its depth, quality, and vision, Aerial will sound exactly like what it is, a new Kate Bush record: full of her obsessions, lushly romantic paeans to things mundane and cosmic, and her ability to add dimension and transfer emotion though song. The set is spread over two discs. The first, A Sea of Honey, is a collection of songs, arranged for everything from full-on rock band to solo piano. The second, A Sky of Honey, is a conceptual suite. It was produced by Bush with engineering and mixing by longtime collaborator Del Palmer.

A Sea of Honey is a deeply interior look at domesticity, with the exception of its opening track, "King of the Mountain," the first single and video. Bush does an acceptable impersonation of Elvis Presley in which she examines his past life on earth and present incarnation as spectral enigma. Juxtaposing the Elvis myth, Wagnerian mystery, and the image of Rosebud, the sled from Orson Welles' Citizen Kane, Bush's synthesizer, sequencer, and voice weigh in ethereally from the margins before a full-on rock band playing edgy and funky reggae enters on the second verse. Wind whispers and then howls across the cut's backdrop as she searches for the rainbow body of the disappeared one through his clothes and the tabloid tales of his apocryphal sightings, looking for a certain resurrection of his physical body. The rest of the disc focuses on more interior and domestic matters, but it's no less startling. A tune called "Pi" looks at a mathematician's poetic and romantic love of numbers. "Bertie" is a hymn to her son orchestrated by piano, Renaissance guitar, percussion, and viols.

But disc one's strangest and most lovely moment is in "Mrs. Bartolozzi," scored for piano and voice. It revives Bush's obsessive eroticism through an ordinary woman's ecstatic experience of cleaning after a rainstorm, and placing the clothing of her beloved and her own into the washing machine and observing in rapt sexual attention. She sings "My blouse wrapping itself around your trousers/Oh the waves are going out/My skirt floating up around your waist...Washing machine/Washing machine." Then there's "How to Be Invisible," and the mysticism of domestic life as the interior reaches out into the universe and touches its magic: "Hem of anorak/Stem of a wall flower/Hair of doormat?/Is that autumn leaf falling?/Or is that you walking home?/Is that a storm in the swimming pool?"

A Sky of Honey is 42 minutes in length. It's lushly romantic as it meditates on the passing of 24 hours. Its prelude is a short deeply atmospheric piece with the sounds of birds singing, and her son (who is "the Sun" according to the credits) intones, "Mummy...Daddy/The day is full of birds/Sounds like they're saying words." And "Prologue" begins with her piano, a chanted viol, and Bush crooning to romantic love, the joy of marriage and nature communing, and the deep romance of everyday life. There's drama, stillness, joy, and quiet as its goes on, but it's all held within, as in "An Architect's Dream," where the protagonist encounters a working street painter going about his work in changing light: "The flick of a wrist/Twisting down to the hips/So the lovers begin with a kiss...." Loops, Eberhard Weber's fretless bass, drifting keyboards, and a relaxed delivery create an erotic tension, in beauty and in casual voyeurism.

"Sunset" has Bush approaching jazz, but it doesn't swing so much as it engages the form. Her voice digging into her piano alternates between lower-register enunciation and a near falsetto in the choruses. There is a sense of utter fascination with the world as it moves toward darkness, and the singer is enthralled as the sun climbs into bed, before it streams into "Sunset," a gorgeous flamenco guitar and percussion-driven call-and-response choral piece -- it's literally enthralling. It is followed by a piece of evening called "Somewhere Between," in which lovers take in the beginning of night. As "Nocturne" commences, shadows, stars, the beach, and the ocean accompany two lovers who dive down deep into one another and the surf. Rhythms assert themselves as the divers go deeper and the band kicks up: funky electric guitars pulse along with the layers of keyboards, journeying until just before sunup. But it is on the title track that Bush gives listeners her greatest surprise. Dawn is breaking and she greets the day with a vengeance. Manic, crunchy guitars play power chords as sequencers and synths make the dynamics shift and swirl. In her higher register, Bush shouts, croons, and trills against and above the band's force.

Nothing much happens on Aerial except the passing of a day, as noted by the one who engages it in the process of being witnessed, yet it reveals much about the interior and natural worlds and expresses spiritual gratitude for everyday life. Musically, this is what listeners have come to expect from Bush at her best -- a finely constructed set of songs that engage without regard for anything else happening in the world of pop music. There's no pushing of the envelope because there doesn't need to be. Aerial is rooted in Kate Bush's oeuvre, with grace, flair, elegance, and an obsessive, stubborn attention to detail. What gets created for the listener is an ordinary world, full of magic; it lies inside one's dwelling in overlooked and inhabited spaces, and outside, from the backyard and out through the gate into wonder. 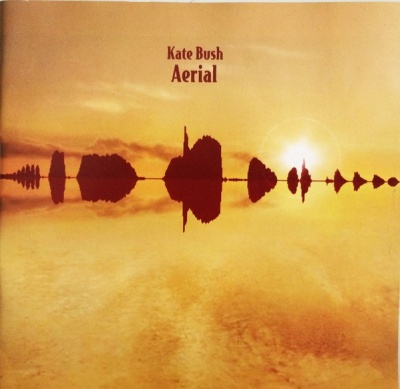