One thing that no one can deny about Sloan is that they can't be ignored as a band always willing to bring out the fun and the rock & roll. They always wear the hearts of their influences proudly on their record sleeves, but never succumb to loss of originality for the sake of trying too hard to impress upon the listener the validity of their roots. Action Pact expands upon Sloan's muscular leanings, due primarily to the band's decision to hire a producer for the first time in its history. Under the direction of Tom Rothrock (producer of artists as diverse as R.L. Burnside, Beck, and Elliott Smith), the songs gel like on no previous Sloan release. The band really plays to its strengths on Action Pact, showcasing remarkably tight vocals, the power of drummer Andrew Scott, and the arena-rocking, bouncy, handclapper songs that defined part of Sloan's post-Navy Blues career. The only noticeable disappointment of this release comes in the decision not to include any compositions by Scott, whose songs have adorned every previous outing by these proud Canadians, but this doesn't really hold back the power and depth of Action Pact; it just seems a bit dishonest to the legacy Sloan has built. Nonetheless, Action Pact is a streamlined album, recorded with minimal overdubs (read: no keyboards), which opens in the classic Sloan one-two punch with "Gimme That" and "Live On" by songwriters Chris Murphy and Patrick Pentland respectively. It's on the fifth track, the Jay Ferguson-penned "False Alarm," where the band starts to really stretch out into fresh territory that never lets up the intensity through the rest of the album. The brilliant pop of Pentland's "I Was Wrong," the jerky tension of "Who Loves Life More," and the elliptical "Reach Out" are all magnified by the obvious inspiration Sloan have found while the lovely "Fade Away," which, even with crunchy guitars, manages to hold onto the delicacy Ferguson always brings to the table and provides a perfect album closer. Lyrically, the members of Sloan continue down the more thoughtful path they first explored liberally on Pretty Together, tackling subjects from the troublesome dichotomy the touring musician faces when a hint of desire to settle down emerges to the defensive argument against the critics who charge the band with treading too close to its heroes. Action Pact is another step ahead for Sloan, which is an achievement they should be proud of considering the superb quality they've shown for the better part of a decade. 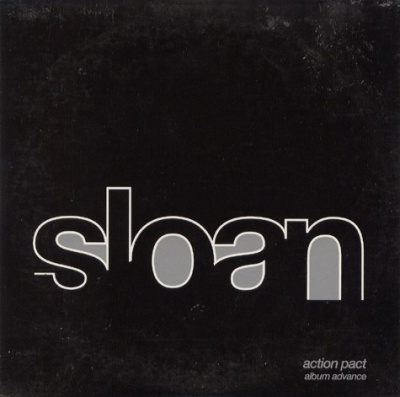