Across the Borderline Review

If ever there were doubts about the breadth and depth of Willie Nelson's ambitions and talents, Across the Borderline should put them to rest. Nelson surveys roughly two decades of popular music, tackling songs by writers as varied as Paul Simon, Bob Dylan, Willie Dixon, and Lyle Lovett. That Nelson covers such a variety shouldn't really come as such a surprise: the songs on Across the Borderline simply consolidate the range of material he's covered previously, from the Bing Crosby-inspired pop standards albums Stardust to the folk-rock of "City of New Orleans." Nelson, along with producer Don Was, assembled a stellar cast of musicians for the album. Paul Simon, Bonnie Raitt, and Mose Allison all guest, and a rock band is Nelson's backup unit for most of the tracks. Of course, country music is at the center of Nelson's vast repertoire, and the two Lyle Lovett compositions he chose to cover for Across the Borderline are wonderfully done, with the accompaniment of Nelson's regular backing band. There are also Nelson's own songs, both new ("Valentine") and old (the rather gloomy "She's Not for You"), as well as a writing and singing collaboration with Bob Dylan ("Heartland"). For all the strengths of the other 13 tracks, the most stunning song on the album is Peter Gabriel's "Don't Give Up." The parts originally sung by Kate Bush on Gabriel's So album are sung here by Sinead O'Connor, a brilliant piece of casting. Nelson and O'Connor's rendition is quietly triumphant and every bit as powerful as Gabriel and Bush's original. The result of the apparently scattershot song selection and numerous musicians is an album that possesses a quiet majesty, further establishing Willie Nelson as one of the most important writers and interpreters of the last half of the 20th century. 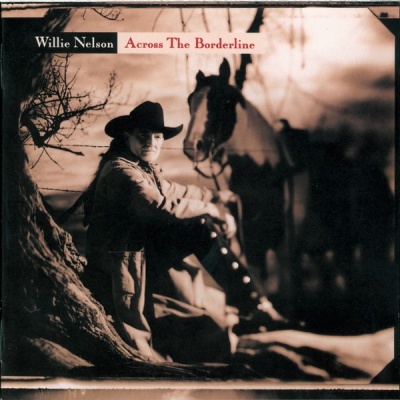 Across the Borderline Album Information