Tony Bennett has sung with k.d. lang previously, notably on his MTV Unplugged album, and the two have meshed well together, largely because of lang's willingness to sublimate herself to Bennett's approach. The same thing can be said of the two on this full-length duet album (which also contains solos -- Bennett is heard alone on "That's My Dream," lang on "A Kiss to Build a Dream On" and "That Lucky Old Sun [Just Rolls Around Heaven All Day]"). It isn't just that lang joins in on material more suitable to Bennett's style than to hers. This is an album on which the musicians are the members of Bennett's backup group (plus strings), recorded in Bennett's studio. But one never gets the sense that lang is restricted by the approach. She is sufficiently versatile, or chameleon-like, to sound like she's enjoying herself, just as she did earlier in her career when she was working with producer Owen Bradley in Nashville and singing traditional country. At 76, Bennett sings with an easy, casual style, never seeming to work very hard for his effects, and lang, in her vocal prime, deliberately complements him, though she never seems quite as comfortable. Although there is no indication other than an uncredited painting (by Bennett, of course) inside the CD booklet, this is a tribute album to Louis Armstrong, who recorded these songs over the course of his long career. That doesn't mean that there's a trumpet to be heard anywhere on the disc or that either of the singers tries to re-create any aspect of Armstrong's vocal style. It simply provides an organizing principle that the listener can notice or not. (Well, it's hard not to notice during the title song, with Bennett's references to "Satchmo" and "Pops.") Like Armstrong, Bennett and lang are trying to make the music sound effortless and unstudied, and to a large extent they succeed. 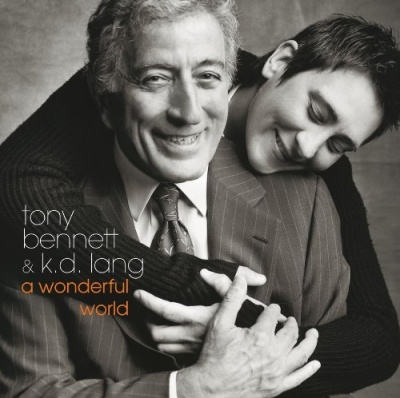