A Taste of Yesterday's Wine Review

So what happens when you put two country music legends on the same record? Apparently Epic and Columbia were big on finding out in the early '80s. This set of Merle Haggard and George Jones is only one of a series -- Willie Nelson and Haggard did two--the frist netted a hit with Townes Van Zandt's "Poncho and Lefty"-Ray Price, Leon Russell, Jones, and on and on. As to the album at hand, it's a satisfying, pleasant listen if not a mind-blowing one. Both men were experiencing resurgences in their careers, particularly Haggard, who was on a roll of fine records, and Jones had come off the enormous success I Am What I Am. Most of the tracks here are somewhat melancholy such as the title track by Nelson, "After I Sing My Songs" by Haggard's wife at the time, and Merle's "I Think I've Found a Way," which are on the sad side, good for sipping whiskey on a cloudy afternoon. The pair's voices blend seamlessly and compliment each other in almost symbiotic fashion. The only problem is, Hag and Possum are a bit too courteous around one another. It's obvious they didn't set out to make a honky tonk record, but they did. Billy Sherrill in the producer's chair was swinging for the radio fences, and he got close, but even he stayed the hell out of the way most of the time here and let the music take its course, and this pair just treated each other deferentially. So side one is pure downer music, and side two picks up the tempo and the grit level. "C.C. Waterback," a Haggard tune written just for this session, is a pure drinking masterpiece with the two trying to keep from laughing their asses off. It's got Haggard's version of Bob Wills Western swing complete with a Dixieland trumpet solo. There's also the Vern Gosdin and Max Barnes honky tonk classic anthem "Must've Been Drunk." And the album closes with a novelty track that can be listened to over and over, a good-natured self-deprecating song by Jones called "No Show Jones" due to his Sly Stone rep for not making his gigs. It's hilarious and sad at the same time, referencing all the country legends with their talents and reputations, and here, in good-time fashion, Jones disappears from the song too. This is a fine album for enjoyment among friends -- especially if you're not looking for revelation. 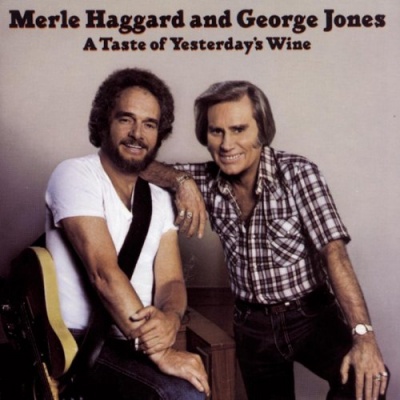