A Man in Black Review

That this particular album was the source of the "Man in Black" image for country icon Johnny Cash is a good example of how the public remembers what it wants to and forgets the rest. Indeed, there are few experiences that one might desire being able to forget quicker than the slide show this artist used to present at his concerts, in which all musical action would grind to a dead halt while shots of the extended Cash and Carter families cavorting in the Holy Land flashed across the stage. This album was actually the musical equivalent of these born-again yearnings, not only featuring a cameo by Billy Graham but also at least one or two more gospel numbers than are normally present on a Cash collection not devoted primarily to that genre. The sparse and subtle backup does indeed go a long way toward smoothing out the wrinkles in this project, while the song "Singing in Vietnam Talking Blues" is a fine example of the socially conscious material this artist was coming up with during the late '60s and early '70s. 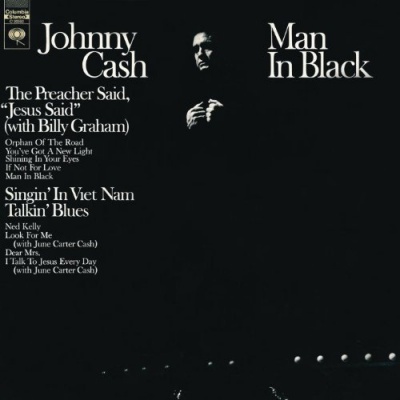 A Man in Black Album Information