The Bangles' first album, All Over the Place, may have earned them a smattering of radio and MTV airplay, but it's clear that with Different Light they were aiming for much higher stakes, especially when Prince -- who was reportedly infatuated with Susanna Hoffs -- offered to write a song for them. "Manic Monday"'s baroque, keyboard-dominated sound was a far cry from anything the Bangles had recorded before, and while Hoffs' breathy voice and her bandmates' fine harmonies fit the song like a glove, it also sent the group down a path that led them away from the '60s-influenced pop/rock that was their strongest suit, and though Vicki Peterson does get to show off her guitar work on a few songs here, the differences between Different Light and All Over the Place are telling and a bit sad. The drum machines that dominate "Walk Like an Egyptian" and "Walking Down Your Street" rob the performances of the organic feel of this group's best music, the funky accents of "Standing in the Hallway" are simply out of place, and while covering Big Star ("September Gurls") and Jules Shear ("If She Knew What She Wants") may have sounded good on paper, neither performance captures what makes each song special. And while the album struggles to rally in the last innings with the more personal air of "Following" and "Not Like You," most of the songs struggle to stand up under David Kahne's overly slick production and the layers of gingerbread added by a handful of guest musicians. Different Light turned the Bangles into bona fide pop stars, but it also transformed a spunky and distinctive band into a comparatively faceless vehicle for a hit-seeking producer; the group tries to let its personality shine through despite it all, but the effort fails most of the time. 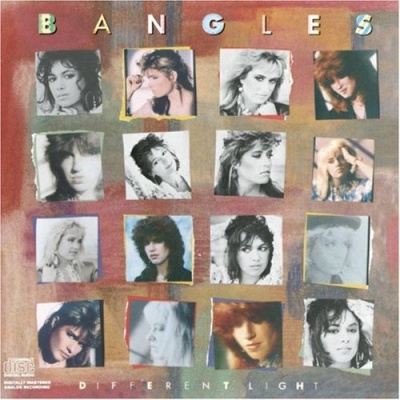