A Boy from Tupelo rounds up all the known existing Elvis Presley recordings from 1953 through 1955, a sum total of 53 studio takes and 32 live performances. The subtitle of the triple-disc set is The Complete 1953-1955 Recordings but it could as easily been dubbed The Sun Years, as the first two discs not only contain all the masters Elvis released for Sam Phillips' legendary Memphis label, but all the outtakes, the four alternate mixes of Sun material released by RCA, and the four acetates Presley privately cut for Phillips' Memphis Recording Service. The third disc is devoted to live material, primarily recorded at the Shreveport radio show Louisiana Hayride, but there are also some tracks recorded at concerts and radio stations in Texas and Mississippi. A lot of this third disc has shown up on prior Presley compilations, usually collections targeted at the hardcore Elvis fans, but A Boy from Tupelo presents all this music in a logical, orderly sequence that suits Legacy's previous big Presley boxes, such as 2011's Young Man with the Big Beat: The Complete 1956 Masters. If A Boy from Tupelo doesn't seem as revelatory as that five-disc box, blame it on the fact that apart from the live recordings -- which are cleaned up, but often can still seem pretty rough -- this is heavily recycled material. Elvis' Sun sessions were first reissued as a 16-track LP called The Sun Sessions in 1976, which was trumped 11 years later by the CD release of The Complete Sun Sessions -- which itself wound up getting usurped in 1999 by the double-disc Sunrise. Additionally, this music can be found on 1992's five-CD The King of Rock 'n' Roll: The Complete 50s Masters, the massive 2010 box The Complete Elvis Presley Masters, and 2016's The RCA Album Collection, albeit spread over some of that set's 60 CDs, so no matter how well executed A Boy from Tupelo is -- and it's very well done, boasting a handsome, detailed book and clean sound -- it can't help but feel a little old hat. Still, those consumers in the market for the earliest Elvis will be satisfied by this, as it not only has everything in one convenient box but the addition of the live material does provide a nice coda to the familiar Sun sessions. 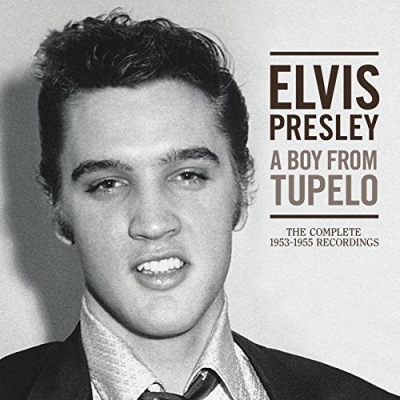 A Boy From Tupelo: The Complete 1953-1955 Recordings Album Information