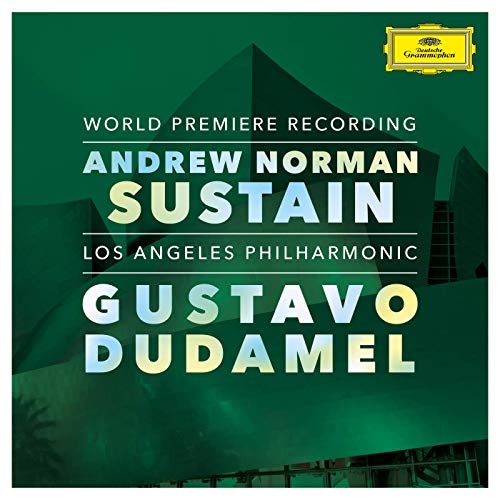 The vast orchestral work Sustain, by the young composer Andrew Norman, unfolds in great waves, in large sections punctuated by duo piano glissandi. It wouldn't seem to be in the wheelhouse of star conductor Gustavo Dudamel, who tends to favor propulsive works with national flavors, but Dudamel does very well here, playing Sustain a good deal faster than in earlier 45-minute performances. Sustain was commissioned by the Los Angeles Philharmonic for its 100th-anniversary season and was presented several times. Dudamel programmed it with Bruckner's Symphony No. 4 in E flat major, WAB 104, an inspired stroke, for the two works have similarities and differences. They have a sense of great musical space, of epic questions of meaning, in common. However, where Bruckner's symphony depends on the classical procedures of counterpoint and sonata form writ large, Norman's single-movement work is periodic, with a big full-orchestra climax coming only in the final minutes. The strings have to, well, sustain consistent quiet sounds over long stretches, and each entrance from other instruments has a role to play and has to be carefully sculpted. It's a spectacular performance, a credit to Dudamel's growing versatility, and those with the equipment to realize it should spring for the best sound available (the release is digital only): the recording showcases the potentials of Walt Disney Hall beautifully. Sustain was a finalist for the 2019 Pulitzer Prize in Music.