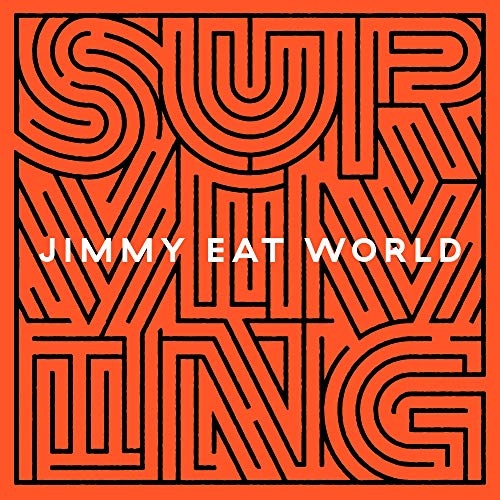 Hitting a career milestone with album number ten, Arizona emo-rock stalwarts Jimmy Eat World defy late-era stagnation with the balanced, advanced Surviving. Like 2016's Integrity Blues, Surviving continues the band's sonic evolution with maturity and confidence, taking the glimmers of moody experimentation from its predecessor and cranking up the urgency. Dealing with depression, alcohol abuse recovery, and self-acceptance, the cleverly titled set isn't just about getting through this life, but about truly living. As frontman Jim Adkins sings on the title track, "You can still survive/But not exactly live" and, with Surviving, Adkins and his bandmates -- Rick Burch, Zach Lind, and Tom Linton -- make a case for taking control of life and leaving troubles behind to fully grasp what's to come. As a self-help session for the almost-middle-aged, Surviving is straightforward and relatable, cycling through highs and lows as powerfully as anything on Clarity or Futures with highlights such as the poetic beauty "Delivery" and the inspirational gem "Diamond." Along with returning producer Justin Meldal-Johnsen (Paramore, M83), the quartet does what they do best, combining yearning, journal-worthy lyrics with passionate delivery that steadies their course after an uneven run in the late 2000s and early 2010s. From its heaviest blasts ("Criminal Energy," "Love Never") to its most anthemic singalongs ("One Mil," "Surviving"), there are plenty of similar moments that recall beloved catalog touchstones from their breakthrough era. Lead single "All the Way (Stay)" even brings back vocalist Rachel Haden, an integral part of 2001's Bleed American. However, without leaning completely on past glories, Surviving also showcases fresh directions for the band, which pushes them into the future as they approach three decades as a unit. In addition to a rousing saxophone solo on "All the Way (Stay)," the album's biggest surprise is "555," an '80s electro-inspired standout that adds 808s and heartbreak to the Jimmy Eat World repertoire. They also take steps into heavier territory with the Davey Havok-featuring closer "Congratulations," a slap in the face from reality that packs dread atop thrilling rock force as Adkins sardonically concludes, "Congratulations, you're on your own!" At a lean ten tracks, Surviving quickly makes its point, pushing through years of pain and emotional turmoil by setting sights on a stronger, more confident future.