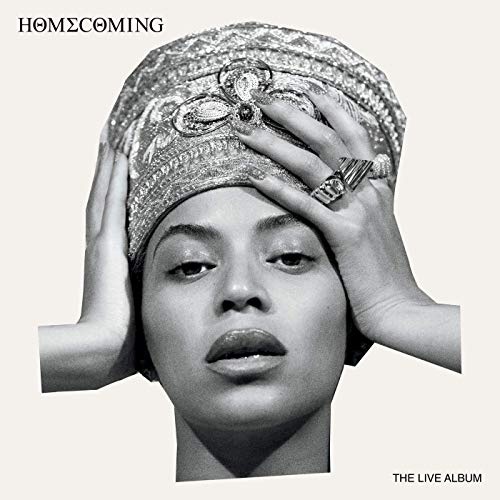 In April 2018, Beyoncé headlined Coachella with an epic performance that would set a new bar for festival spectacle. Arriving a year after her originally scheduled headline slot -- delayed due to the birth of her twins -- the high-stakes show was a triumph. Immortalized alongside its counterpart concert film/documentary, Homecoming: The Live Album is a monument to black excellence and empowerment. As the first African-American woman to headline the festival, Beyoncé took the duty seriously, crafting a showcase of black culture, feminism, and history that acknowledged her place in the timeline while celebrating those who paved the way, from strong black women such as Nina Simone, Maya Angelou, Toni Morrison, and Chimamanda Ngozi Adichie to Southern hip-hop inspirations like TRU, UGK, OutKast, and F.L.Y. Presented through an inspired collegiate HBCU lens, the performance later dubbed "Beychella" was less a concert and more a grand, multi-part revue. From a towering pyramid of bleachers, over 200 hand-selected performers of all shapes and sizes -- dancers, steppers, choir, orchestra, and a full marching band -- executed a precision-choreographed performance that pushed the limits of physicality and willpower. Together with this phalanx, Beyoncé barreled through a career-spanning set -- both as a solo artist and as part of Destiny's Child -- focusing on euphoric hype tracks that maintained the adrenaline rush for almost two hours.

Digested as a cohesive career retrospective, Homecoming highlights Beyoncé's impressive vocal gymnastics and live stamina; at times, her voice soars like an angel and drops low in a guttural growl, sometimes switching from full-throated belting to gritty rapping, often within the same song. From hits ("Formation," "Drunk in Love," "Countdown") to deep cuts ("Freedom," "Bow Down," "I Been On"), every track is improved by the energy of the Bzzzz Drumline and string section, with the live foot stomps and handclaps of the dancing team whipping the ceremony into a celebratory frenzy. "Diva" gets cut with "Dirt Off Your Shoulder," while a rabid "Don't Hurt Yourself" swells with the familiar orchestral wave from "Kashmir." While J Balvin and Sean Paul are relegated to recorded backing vocals, husband Jay-Z pops in for "Deja Vu" and sister Solange joins Beyoncé for an endearing dance-off during "Get Me Bodied." Even firstborn Blue Ivy appears on almost-closer "Lift Every Voice and Sing." The most welcome guests, however, are Kelly Rowland and Michelle Williams. Joining forces during a jaw-dropping stretch between "Run the World (Girls)" and "Single Ladies (Put a Ring on It)," the reunited Destiny's Child whip through "Lose My Breath," "Say My Name," and "Soldier" without missing a beat, as if the year was still 2004. The audience reaction alone is a pure thrill. As far as concert albums go, Homecoming is a master class in technical prowess, crowd pleasing, and soulful substance. Channeling the spirit of African queen Nefertiti (whose image she adopted for this show), Beyoncé proved to be a ruler in her own right, lording over Coachella for two career-defining nights.