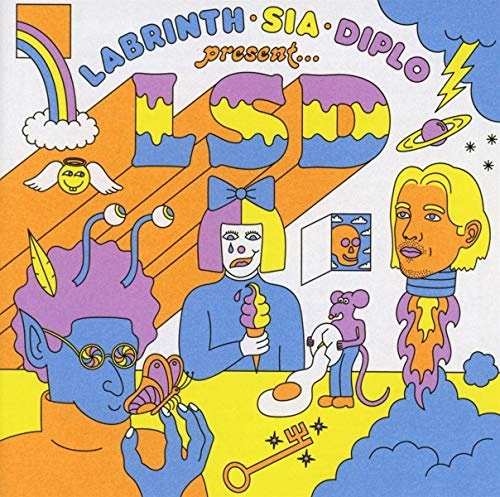 Stepping into a colorful funhouse of sonic psychedelia, the super trio of Labrinth, Sia, and Diplo take a kitchen-sink approach to this collaborative affair, throwing whatever happens to tickle their collective fancies into the whimsical Labrinth, Sia & Diplo Present LSD. With Sia's inimitable voice, Labrinth's smooth, soulful backing, and Diplo's typically popping production, LSD is a pure joy and unrelenting in its creativity. Following an extended year-long rollout, the final product stands at a modest nine originals (with one Lil Wayne remix), making for a brisk trip through the wild world within. The skittering "Angel in Your Eyes" traipses through spurting noise effects, walls of horns, and a cappella loops as Sia and Labrinth trade vocals. The rest of LSD is much the same, but with different sonic variables: the booming "Genius" stomps through a jungle of outrageous lovestruck proclamations that fit right into this strange world, while "Audio" sparkles as one of the most gorgeous and polished gems on the album. "Thunderclouds" is the heart of the project, not as overwhelming as other tracks and ideally balanced among Sia's powerful vocals, Labrinth's standout performance, and Diplo's relatively restrained (for this project, anyway) pop sense. While the second half of the effort lags in comparison with the strong opening stretch, the playful "No New Friends" maintains momentum even as the gorgeous but subdued de facto closer "It's Time" puts this party to rest. Considering the combination of such talents, it's no wonder that LSD is so good and so fun. While it might be too relentless for some, it's an experience to embrace and enjoy.