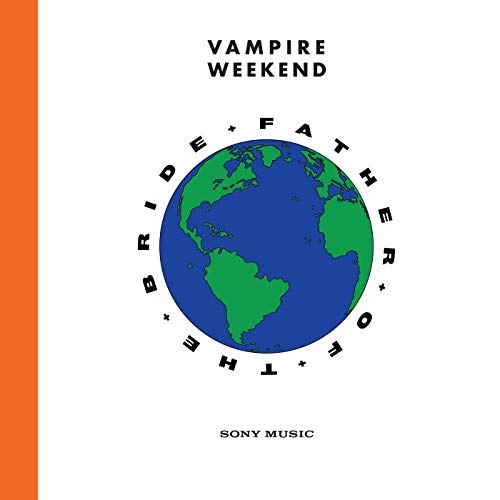 During the six years between Modern Vampires of the City and Father of the Bride, things that seemed essential to Vampire Weekend changed drastically. Founding member Rostam Batmanglij left to pursue his solo career, while Ezra Koenig left the East Coast to settle in Los Angeles. These shifts in lineup and location are just a few of the changes Vampire Weekend take in stride on their fourth album. After reaching peak musical and lyrical density on Modern Vampires of the City, they're reborn with a West Coast perspective and pace on Father of the Bride, giving all 18 of its songs more room for their novelistic detail and surprising juxtapositions. It's easier to hear and feel where the band is coming from, in large part because Koenig's songwriting is clearer than ever. Falling in love with Kacey Musgraves' music inspired him to emphasize his characters' emotional histories, and even on a highly structured song like "Unbearably White," the sorrow of an impending breakup has more impact than the clever wordplay. The band makes the most of Musgraves' influence on their duets with Danielle Haim, whose supple vocals add richness to "Hold You Now" and the bubbling electro-country of "Married in a Gold Rush," a tale of a hurried relationship that deepens with each verse. Along with Haim, Vampire Weekend worked with collaborators both familiar -- at this point, Ariel Rechtshaid is an honorary member of the band -- and new. One of their most exciting partnerships is with the Internet's Steve Lacy, who contributes to the brilliant psych-soul of "Sunflower." Elsewhere, Vampire Weekend's musical allusions are equally audacious; like California itself, their fusion of country, electro, folk, R&B, and pop is equally rustic and plastic. "Sympathy"'s charging riffs owe as much to flamenco as they do to the Doobie Brothers' "Long Train Runnin'"; just a few songs later, the band samples Haruomi Hosono's ambient electronic track "Watering a Flower" on "2021." These wide-ranging sounds reflect the ambiguity that Vampire Weekend skillfully uses to express the complexities of 21st century life. On the standout "This Life," the band pairs words full of existential doubt with music that snaps its fingers, and when Koenig borrows the line "I don't wanna live like this, but I don't wanna die" from the Modern Vampires track "Finger Back" and sets it to gospel-tinged pop that evokes the Rolling Stones' "You Can't Always Get What You Want" on "Harmony Hall," it sounds strangely liberating. As the album comes to a close, the band offers a few moments of unmitigated joy. "Stranger" sings the praises of everyday life as a balm against the outside world; similarly,"We Belong Together" serves as a cozy reminder that as difficult as they can be, relationships are one of the few sources of stability in an increasingly volatile world. More complex yet more direct than anything they've done before, Father of the Bride finds Vampire Weekend embracing change and delivering some of their most mature and satisfying music in the process.