Pony Express Record might have been Shudder To Think's self-consciously difficult art-punk album, but 50,000 B.C. is their move toward big-rock. Sporting a slick, polished guitar sound and anthemic harmonies, 50,000 B.C. is more accessible than the rest of the group's catalog, at least on the surface. However, Craig Wedren's songs remain remarkably versatile and eclectic, ranging from Queen-style pomp-rock and power-pop to doo-wop and folk-rock. Shudder To Think can pull off these stylistic variations with aplomb, but the smooth production gives the music the illusion of being more accessible than it is; it is melodic, but the melodies follow twisted paths, and Wedren's high, vibrato-laden voice can be off-putting to some. Which leaves Shudder To Think in an odd position. Their music is too odd for the mainstream, but it now sounds too slick for their old hardcore and indie-rock following, which means 50,000 B.C. is the kind of eclectic post-punk that will primarily appeal to critics and record collectors. 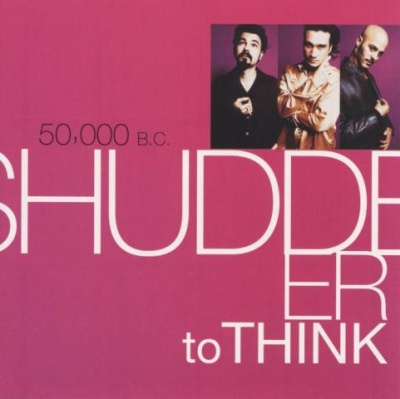