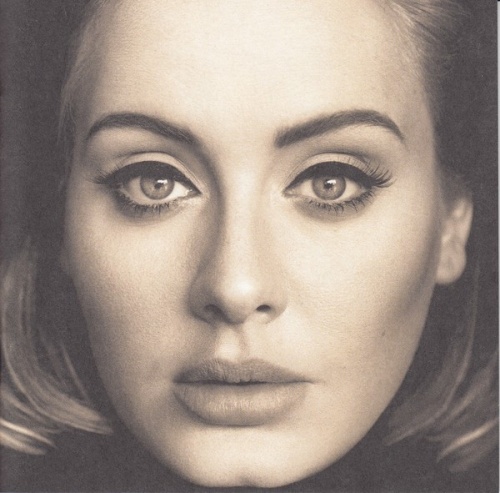 Autobiography is baked into Adele's art. She called her first album 19, naming it after her age at the time of writing, and like a musical, millennial Michael Apted, each successive album represented another chapter in her life's story. Fueled by heartbreak, her roiling 2011 record 21 ushered in her adulthood and superstardom, two acts that were instrumental in the creation of 25, the 2015 album purportedly documenting her mid-twenties. Between 21 and 25, Adele fell in love and started a family, an event that would surely be grist for a memoirist's mill if Adele was as confessional a singer/songwriter as she appears, but she is not. Like 21 before it, the love that flows through 25 is either curdled or lost, love that can no longer replenish or nourish. It is certainly not the kind of love that would arise from a satisfying, stable relationship, but it is indeed the kind of love that is recognizable from 21: love that hurts, not heals. While her themes may remain the same, Adele isn't the same singer as she was in 2011, nor is 25 a carbon copy of 21. Success has given her the confidence to abandon any lingering Amy Winehouse influence, taking along with it any sense of swing or sass. Max Martin and Shellback give "Send My Love (To Your New Lover)" a subdued, spliced electronic pulse, just enough of a rhythm to distinguish the track from the rest of the record. But it and the cinematically surging "Water Under the Bridge" -- a song begging to be played over the closing credits of an inspirational biopic -- wither when compared to the wallop of "Rolling in the Deep." This stateliness is intentional, forcing attention with both the full force gale that is Adele's voice and, not so coincidentally, her placid good taste. It isn't so much that Adele doesn't take risks -- she's hip enough to enlist Haim/Charli XCX's producer to helm "When We Were Young," a song co-written with hotly tipped sensitive soul Tobias Jesso, Jr., and she brings in Danger Mouse to help orchestrate the neo-gospel of "River Lea." But she's so devoted to ballads, ballads determined to convey grace and strength in the face of loss that she winds up residing in a middle of the road, which makes her seem much older than the quarter century of the title. Adele doesn't help matters by dwelling on the passage of time, repeatedly returning to the idea that she ain't a kid anymore. It's a sentiment that suits a singer many years past 25 yet also suggests a bit of savvy on her part: these are songs that are meant to be heard -- and sung -- for years after the album's initial release, gathering resonance with the passage of time. Fittingly, 25 also plays better over the long haul, its march of slow songs steadily revealing subtle emotional or musical distinctions. Make no mistake, all 11 songs are of a piece -- they're shaded by melancholy, gaining most of their power through performance -- but that cohesive sound only accentuates how Adele has definitively claimed this arena of dignified heartbreak as her own.