Essentially the first large-release concert recording by Duke, this one took place in the spring of 1952 in Seattle. It's something more of a showcase for his players than specifically a Duke Ellington concert. Each song allows one of the players to take an extended solo throughout the work, and the majority of the pieces are actually compositions by the various bandmembers in the first place (as opposed to Ellington works). Drummer Louie Bellson starts out the set with an outstanding extended drum solo on his own "Skin Deep." Britt Woodman shows off his skill on "How Could You Do a Thing Like That to Me (Sultry Serenade)." Willie Smith uses "Sophisticated Lady" as his showpiece. Clark Terry does an excellent job on Juan Tizol's "Perdido," and Tizol does his own (along with Ellington) "Caravan" to high precision. The band does Ellington's "Harlem Suite" together, and the trumpeters work together on Bellson's "The Hawk Talks" (actually written while he was back in Harry James' band). The band comes together again for the requisite medley of Ellington hits, and Willie Cook finishes off the set with "Jam With Sam." Overall, it's a stunning concert, though the sound quality takes a dip here and there. Pick it up if at all possible. 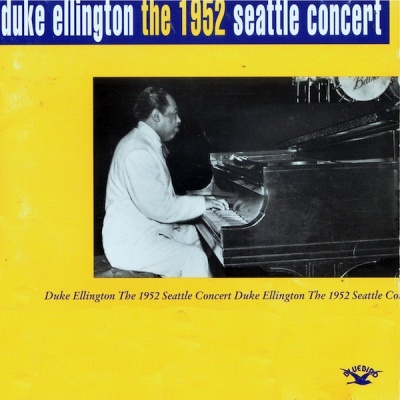