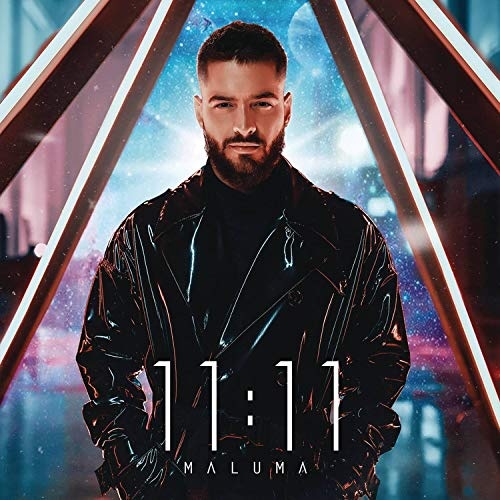 Any way you look at it, the release of Maluma's 11:11 is a gamble after the six-times-platinum success of F.A.M.E. Issued almost exactly a year earlier, it remained in the Top 20 as this date appeared. But the Colombian star has momentum: He's joined the select club of performing artists to have over 40 million followers on Instagram and over 25 million YouTube subscribers. Maluma enlisted a boatload of collaborators for this release, covering all his stylistic bets. The first half of the set is marked by slick pop and reggaeton tunes such as opener "11 P.M." and the smash single "HP." "No Puedo Olvidarte," featuring Nicky Jam, is a moody midtempo ballad with nearly industrial-sounding cellos amid its layers of funky dance beats that swirl around the singers. While "No Se Me Quita," a return collaboration with Ricky Martin, doesn't register the intensity of their 2016 party anthem "Vente Pa Ca," it's nonetheless a sweet, breezy, infectious tropical summer groover. "Extrañádote" is pure pop reggaeton featuring Zion & Lennox.

The straight songcraft of the first half contrasts with its more adventurous latter half; Maluma takes more chances than ever before in his attempt at crossover domination. While he and Madonna scored big with her "Medellin," she returns the favor on the playful, bilingual, proto-feminist "Soltera." She delivers her best Auto-Tuned Natacha Atlas impression in the Eastern modal intro before bumping beats and loops underscore Maluma's boastful rapping. She puts him in his place soon enough and leaves him alone with a deflated ego. He follows the track with a burning salsa on "Te Quiero," complete with swinging horns. Panamanian star Sech imparts his low, smooth, R&B croon on "Instinto Natural," buoyed by layers of acoustic guitars. "Tu Vecina" is delivered sung and rapped bilingually with Ty Dolla $ign. Colombian diva Farina gets a close-up in the trap-cum-R&B of "Puesto Pa’ Ti" before Maluma carries it out solo with the explicit reggaeton babymaker "Dejale Saber." While other hitmaking urbanos (J Balvin, Bad Bunny, Ozuna, Farruko et. al) have also pursued crossover domination, Maluma is poised to succeed due to the seamless adaptability he offers on 11:11. He displays over and again here that he not only indulges stylistic diversity, but masters it.